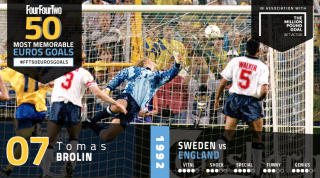 Given everything else that surrounded England’s dramatic exit from Euro 92, the goal that finally put an end to their misery needed to be something special to be more than a mere footnote in football history.

England had huffed and puffed throughout the tournament and, after lacklustre goalless draws against Denmark and France, it was the hosts who finally blew their house down.

The main talking point was Graham Taylor’s decision to withdraw 48-goal striker Gary Lineker with the score at 1-1 and England needing a win to progress. That throwing the captain’s armband away in dismay would be Lineker’s last act with three lions on his shirt only added to the drama.

But the enduring image of England’s tournament came courtesy of The Sun, who turned Taylor’s head into a turnip after a stunning winner from Sweden’s rising star.

Tomas Brolin had sprung to prominence two years earlier at Italia 90, having not even featured in qualifying. A hat-trick against Gothenburg on his Norrkoping debut, though, saw him fast-tracked to the senior team, who had only managed nine goals in topping their group ahead of England.

Sweden failed to win any of their games at the World Cup, but the 20-year-old Brolin’s fine goal against Brazil served notice of his talent. By the time the Scandinavians welcomed the cream of Europe two years later, he was the main man. Not that he felt the pressure.

“I can’t say that I don’t care but I just think it’s great fun to play in front of a stadium full of spectators and that gets me going in a positive way,” recalled Brolin, who’d already scored the winner against Denmark in the previous game. “I have never understood the thing with pressure and stuff, I have always felt most pressure from myself and I think that pressure was higher than most others felt and it went well anyway.

“A home game in the European Championship is not something a footballer gets to experience very often so we were lucky to be able to experience it.”

Despite taking an early lead through David Platt’s scuffed shot from Lineker’s cross, England began to drop deeper and surrender more possession as the first half wore on. “I remember at half-time going in and saying to the players, 'Have any of you got anything to say at all?’ and they looked shattered,” recalled Taylor.

Sweden emerged from the break with increased verve and equalised soon after through Jan Erikkson’s header. Then Taylor made the controversial decision to replace his captain with Alan Smith. “Not that it did much good,” recalled the latter. "I’d hardly had a touch when Brolin got the winner.”

Picking up the ball in the inside left channel, the fleet-footed No.11 played not one but two one-twos, first with Klas Ingesson, then with strike partner Martin Dahlin, prompting Barry Davies’ memorable BBC commentary. “Brolin. Dahlin. Broliiiiin... Brilliant!”

“That goal was  a very important goal for us and the tournament,” said Brolin, who would score again in defeat to Germany in the semi-finals. “It was important, because if we won against England we would be pretty much done. All other results did then not matter.”

“At the time the most important thing was to score and for us to win, but later I did understand how big it was and it would become a classic goal that would repeated on television many times.”

Although things would get worse for Taylor’s England, who subsequently failed to qualify for USA 94, in hindsight there was no shame in losing to a Sweden team who went on to finish third in the States, and to a goal from a player who would again be one of the players of the tournament.

Missed any of our 50 most memorable Euros goals? See the full selection here