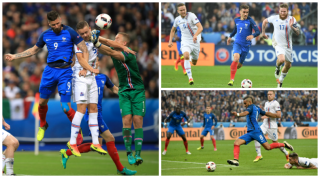 France demolished Iceland on Sunday night at Stade de France and gave England a lesson in how to see off niggly knockout-round opponents. A resounding 5-2 victory sees the French through to face Germany in Marseille on Thursday.

And as Didier Deschamps' men wrapped up the game in the first 45 minutes, establishing an historic first-half four-goal lead (never achieved before in a European Championships game), it became painfully obvious that England had been missing the same cutting edge, defensive vigour and midfield energy that saw the tournament hosts progess.

England just could not get any of their star strikers to fire. For France, not only did Olivier Giroud hit a double but Antoine Griezmann lobbed Icelandic goalkeeper Halldorsson to go clear as the tournament's top scorer with four goals. And then there's Dimitri Payet, a contender for player of the tournament, to factor in too…

Roy Hodgson's men couldn't find the back of the net with any regularity and constantly looked short on confidence and belief, a disjointed troupe of mistaken players who all thought they could achieve for England alone and lacking in team spirit.

England couldn't convert the many chances they created

Paul Pogba, meanwhile, put in another commanding midfield display that showed what England were lacking. The Juventus star once again recovered the most balls in the match (11) and made the most passes, completing some 93.7%.

Wayne Rooney, who might be considered the closest player the Three Lions can offer in terms of playmaking ability, languished behind the French attacking midfielder in this respect, with 7 ball recoveries versus Iceland; the joint highest for England, but only an 84.7% completed pass rate, with 22 of 27 passes find their target in the last third, one chance created, and 43 passes made forward.

Maybe England's style of play needs examination too: France put in just nine crosses against Iceland while England hoisted up a whopping 29.

And although Hugo Lloris and Co. also conceded twice from set-pieces the foothold established by that point ensured that the French remained out of reach as Sigporsson and Bjarnason got their names on the scoresheet.

France made more successful headers in the centre of their penalty box to repel Iceland attacks, and were better organised to defend that long throw

France were still effective enough at the right times to ensure victory, one of many lessons that England need to learn.