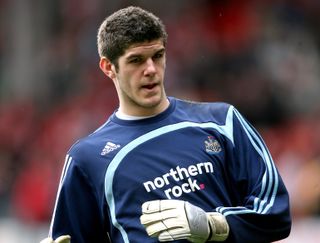 Nickname
A lot of the lads at Newcastle called me Phelpsy because I look like the American swimmer Michael Phelps. My swimming's not that great, though. I also get called High Tower because of my height – and no, I'm not a Police Academy fan!

Team supported
I grew up in Newcastle and was always a fan of the team growing up. I started going to St James' Park when I was about 11. I had a season ticket for a few years when I got a bit older. I watched the team that had all those great players like David Ginola, Tino Asprilla and Les Ferdinand. They were brilliant back then [Newcastle were in the Championship when this interview took place].

Strengths
My shot-stopping ability is probably my greatest strength, and I reckon I've got a good command of my 18-yard box.

Weaknesses
There are always things you can work hard on. I'm not targeting any specific weaknesses, but I try to improve constantly.

I play a bit like...
I always liked watching Peter Schmeichel at Manchester United and tried to copy him. He was always the best keeper around when I was growing up. He was just massive, and made his presence felt. He pulled off some unbelievable stops – he used to do starfish saves where he'd make himself huge and so hard to beat.

Highlights
I've really enjoyed winning some Man of the Match awards at Norwich, and I got the Norwich fans' Player of the Month award back in November, which meant a lot. One game I really enjoyed was Tranmere at home. I pulled off a really good save just before half-time with the game 0-0. We went on to win.

Lowlights
There aren't any that I dwell on. Obviously as a goalkeeper you can have difficult games, but I don't think about them; I just move on and consider it good experience – something to learn from.

Toughest opponents
Rickie Lambert at Southampton. He's got a really good strike on him – it's hard and accurate. He's a real handful upfront. I've also gone up against Michael Owen in training and he's obviously very good. He just takes chances when he gets them.

Best player played with
Wes Hoolahan is excellent – he's generally a handful. You don't know what he's going to do, and he just goes past players – he makes it look easy. Chris Martin and Grant Holt have had very good seasons, too.

Biggest influence
At Newcastle, Steve Harper and Shay Given have been very helpful and a massive influence. They give you specific pointers, but you can learn so much just by watching them – how they position themselves and so on. The goalkeeping coach at Newcastle, Paul Baron, has also been brilliant with me.

Best advice you've been given
To work as hard as you possibly can all the time and see where it takes you.

If I wasn't a footballer...
I'd have gone to university. Who knows after that? I've got A-Levels in economics and psychology.

Chicks
It's not original, but I'll go for Megan Fox.

Flicks
I picked up Shooter with Mark Wahlberg randomly in HMV and it turned out to be really good.

Holiday destination
Dubai. It's nice to get out in the sun, away from the miserable British weather.

What did you buy with your first wage packet?
Not very much, to be fair! I think it was only about ninety quid a week, so it didn't stretch far. I think I just saved it!

In five years' time...
I would like to play at the highest level, of course. It would be great to eventually make it to the Premier League.

Interview: Nick Moore. From the April 2010 issue of FourFourTwo.