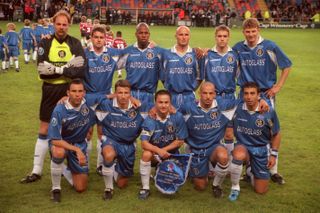 Many of the players you’ve played with, especially at Chelsea, have gone on to become managers. Why do you think they have done so? What makes them such good managers?
I’d love to think it was because we were intelligent players! [laughs] No, it’s something we had thought a lot about, and nine players that were in that team are now managers. With the football intelligence of that team, you could see when they were on the pitch that they had the intelligence to become managers. They were football players with a lot of passion and knowledge.

Steve Clarke (West Bromwich Albion 2012-)
You could see he was an intelligent player, how he used to read situations, so it's no surprise to see him there.?

Gus Poyet (Brighton & Hove Albion 2009-2013)
Well, Gus was 'The Radio'! You could see that Gus as a player wasn’t quick, but he looked like he was the fastest on the pitch because he was always in the right place at the right moment. He was somebody who used his brain a lot when playing football, so it's no surprise to see him doing well as a manager.?

Roberto Di Matteo (MK Dons 2008-09, West Brom 2009-11, Chelsea 2012)
Again, Di Matteo wasn’t the quickest, but he was tidy and organised on the pitch, with a lot of skills and he was intelligent. You could see he wasn’t one of those players who runs behind the ball, he was always moving intelligently. He had a lot of qualities needed to become a manager.

Mark Hughes (Wales 1999-2004, Blackburn Rovers 2004-08, Manchester City 2008-09, Fulham 2010-11, Queens Park Rangers 2012)
Mark has been quite a surprise, not because he wasn’t intelligent, but I didn’t think he wanted to become a manager. About Mark, it was his presence, his personality, his character – that was something which makes him effective as a manager.

Gianluca Vialli (Chelsea 1998-2000, Watford, 2001-02)
Luca, it's probably his focus, his organisation, his determination to do something. It’s a pity he didn’t continue, but his knowledge about football is huge.

Ruud Gullit (Chelsea, 1996-98, Newcastle United 1998-99; Feyenoord 2004-05, LA Galaxy 2007-08, Terek Grozny 2011)
With Ruud it was his knowledge, he had been in three different countries, Holland, Italy and England so his football knowledge was huge. The way he used to make the team play with freedom was quite good.

Didier Deschamps (Monaco 2001-05, Juventus 2006-07, Marseille 2009-12, France 2012)
Didier: intelligence, pure intelligence, very good. As a footballer, he had skills, but not skills that you could say would make the player he became. Unbelievable intelligence, his tactical abilities were incredible.�g>

Gianfranco Zola (West Ham United 2008-10, Watford 2012-)
I don’t know! honestly I didn’t know I was going to become a manager. I didn’t think that I had the qualities – I still don’t know if I have the qualities to be honest! But that’s the biggest surprise to me.