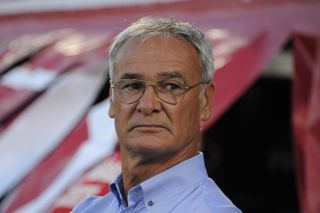 It’s not beyond the realms of possibility that Claudio Ranieri bumps into Ken Bates every now and again in Monaco. His former chairman at Chelsea is a resident in the tax haven and, hey, it’s a small place.

Last month marked the passing of a decade since Bates sold his old club to the Russian oligarch Roman Abramovich.

On the bench at Stamford Bridge back then was Ranieri, of course. He’d last just one more season. Chelsea finished second in the Premier League that year behind the Arsenal side, coached by the former Monaco manager Arsene Wenger, that would enter into history as 'The Invincibles'. Knocked out of the Champions League at the semi-final stage - as fate would have it, by Monaco - Ranieri was then replaced by Jose Mourinho.

Harshly done by, he had everyone’s sympathy. “Chelsea were a building site that year, but we got into the final four in Europe,” Ranieri reflected. Not long afterwards, he’d take a modicum of revenge as he led Valencia to Super Cup victory over the Porto team Mourinho had just left behind. The venue: Monaco’s Stade Louis II. “It brings me luck,” he smiled.

The principality has been quite a recurring feature in Ranieri’s career. For many, the circumstances in which he finds himself in the principality are not too dissimilar to those he experienced towards the end of his time at Chelsea. In Dimitry Rybolovlev, for instance, they see another Roman Abramovich.

To a certain extent it’s understandable. They’re both 46, hail from the same country, made their fortunes at the same time in the cowboy capitalism of `90s Russia and have chosen to lavish a vast amount of it on their football clubs. But the comparisons only go so far. Just look at the starting points.

Had Rybolovlev bought Monaco a decade ago, like Abramovich did Chelsea, he would have acquired a club that had finished on the podium in France and were runners’ up in Europe. A lot changed in the meantime, however, and by the winter of 2011 when he purchased a 66.7% stake in the seven-time French champions, they were down in Ligue 2.

It was hardly the same situation as Chelsea’s back in the summer of 2003. They hadn’t finished outside the top six in the Premier League for eight seasons and in addition to winning the League Cup, Cup Winners’ Cup and European Super Cup had also lifted the FA Cup twice over the same period.

Monaco have had to come from a lot further back, and as such, Ranieri has dismissed descriptions of their project as Chelsea 2.0.

So how does he see it? “It’s a little like when I took Cagliari from Serie C to A,” Ranieri has argued. “Or achieving promotion with Fiorentina and winning the Coppa Italia. Or going from mid-table to qualifying for the Champions League with Valencia and winning the Copa del Rey. I like to build. It’s in my DNA.”

The reality is quite clearly somewhere in between. Ranieri never had £21.5m to spend when he was trying to get Cagliari or Fiorentina up. Nor did he have £130m with which to plan their first season back in the top flight. Come to think of it, no promoted club has ever had a budget like it.

That’s what makes events on the Cote d’Azur this summer quite unprecedented.  As does Monaco’s tax status, the advantages of which remain, despite the demands made by the league following their promotion that the club establish a base in France and conform to the fiscal regulations which apply to every other team in Ligue 1.

After going to court to protect that privilege, one wonders how Monaco will be able to comply with UEFA’s Financial Fair-Play rules when they inevitably qualify for Europe. Only time will tell whether their apparent intention to market the club as a “boutique aspirational brand” and sell 6,000 luxury seats at a cost of €2000 a game will drive enough revenue to convince the bean counters in Nyon. The scepticism is understandable.

For now, however, Ranieri the builder has his hard hat on and could be mistaken for an Italian Kevin McCloud in a French version of Grand Designs, with director of sport Vadim Vasilyev and super agent Jorge Mendes poring over the plans, a pencil resting on one ear like would-be architects.

The general expectation is that Monaco will challenge for the title and that Ligue 1 will become something of a Battle Royal between them and Paris Saint-Germain. Although, given how high-rolling both have been, perhaps Casino Royale would be more fitting.

Yet for all the aggressive investment, the rhetoric out of club has been conservative and rather cautious. “The club has asked me to finish in the top three,” Ranieri told Il Corriere della Sera. Rybolovlev reiterated as much in a rare interview with L’Equipe in June. “We’re coming from Ligue 2,” he said. “It’s true that we have a lot of ambition and expectation, but our primary ambition will be to qualify for the Champions League. After that we’ll see...”

As you can imagine, few are buying that, and have interpreted Rybolovlev’s comments as an exercise in managing the expectation of which he speaks. But there’s a level-headedness to his take on Monaco’s chances this season.

PSG, remember, spent £93.5m in their first year under Qatari control and were beaten to the title by Montpellier. Rybolovlev perhaps doesn’t want to set himself and the club up for a similar fall.

Presumably he’s also mindful of how even when PSG won the championship last season - notwithstanding an additional spree of £130m - they still made hard work of things and often resembled a group of individuals who had suddenly been thrown together, which of course they were, rather than a team.

The lesson here is that no matter how much money a club spends, it takes time to develop cohesiveness, a high level of understanding between players not to mention a style. There will be growing pains.

On the surface, Rybolovlev seems to get this. Monaco have undergone tremendous change over the summer. The team is almost unrecognisable from the one that won promotion with a 1-0 victory over Nimes in May. Only four of the players who were in the starting XI that day lined up for Monaco in their opening Ligue 1 fixture against Bordeaux at the weekend.

The new Monaco, however, is already showing signs of coming together. And maybe that shouldn’t be too much of a surprise. Why not? Well, because if you look at their recruitment, for the most part it’s been expensive but intelligent.

Radamel Falcao, Joao Moutinho and James Rodriguez, all £114.4m of them, have played together before at Porto and in the same area of the pitch too. The salt-and-pepper haired Jeremy Toulalan is one of Europe’s most underrated deep-lying playmakers and has won Ligue 1 twice already with Lyon.

Ricardo Carvalho and Eric Abidal bring experience and assurance at centre-back. Then there’s a cluster of exciting young players, from former River Plate starlet Lucas Ocampos to Layvin Kurzawa and Yannick Ferreira-Carrasco, who give Monaco an effervescent left-hand side. Incidentally, each of them came to the fore at the Stade Chaban-Delmas on Saturday night.

"[Throughout the first half] they never stopped provoking, dribbling, looking for the perfect pass in the most difficult space to find. And then doing it all over again,” wrote Regis Testelin in L’Equipe.

Monaco played with great enthusiasm and energy, a sense of abandon, even. In their exuberance, they left themselves open on the counter-attack, but this preparedness to take risks was thrilling. “Monaco, like a breath of fresh air,” was L’Equipe’s headline.

Their approach contrasted starkly with the counter-attacking PSG, who had struggled to overcome the same opponents in the Champions Trophy a week earlier, needing to come back from behind in Gabon where they only sealed victory in the 95th minute.

Monaco also left it late against Bordeaux. Although their goals came from defensive mistakes pounced on ruthlessly by Emmanuel Riviere and Falcao on his competitive debut for the club, there was absolutely no doubting that they deserved to win.

“I wasn’t surprised by the standard of Monaco’s play,” said Bordeaux coach Francis Gillot. “I saw them against Tottenham [who they had beaten 5-2 the week before] and when they can allow themselves to leave Moutinho on the bench that says it all.” It certainly was some statement.

Though “happy, yes, very happy” with the manner of their 2-0 win, Ranieri was refusing to allow himself to get carried away. “Our victory is not a message sent to Ligue 1, it’s too early for that,” he insisted.

Championships, as Ranieri’s antagonist Jose Mourinho likes to say, are won in May, not August and certainly not after one game. Where Monaco are in nine months’ time will be the proof of this pudding and its rich ingredients. How they react when the going gets tough will be interesting too. Although Roberto Mancini and Guus Hiddink have been linked with the post at various stages over the last year, Ranieri appears to count on Rybolovlev’s respect and faith.

“He is the man for the situation,” the potash fertiliser tycoon said. It’s hard to disagree. Ranieri, if you recall, led newly promoted Juventus to a third place finish in Serie A in 2008. Whether achieving the same result would, as Rybolovlev has indicated, be enough to keep his job remains to be seen. “I don’t feel pressure. Actually I only feel positive pressure,” Ranieri claims.

It’s the kind of outlook that makes it hard not to warm to him. No one would begrudge Ranieri winning a first major league title with Monaco, not after coming so close on so many occasions. True, they have spent a colossal amount and were they to do it, it wouldn’t have the same romance as when Everton came up and won the old English first division in 1932 or Kaiserslautern the Bundesliga in 1998. But look at it this way: were it to come for Ranieri, it probably couldn’t happen to a nicer guy.