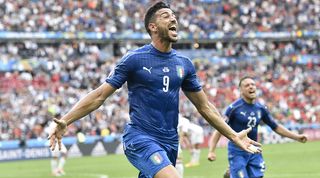 Italian striker Graziano Pelle has spoken to journalists about his big-money transfer to what he is fairly sure is a football team in China.

A beaming Pelle told the assembled press corps that he couldn’t be happier about his move to Shandong Luneng and stressed that he couldn’t wait to make a significant contribution to whatever work it is that they do.

“It’s a real honour to sign for [Shandong Luneng],” Pelle told FFT. “I can’t wait to start this new chapter of my life at what I presume to be a football club in China or thereabouts.

“I’m looking forward to taking on our local rivals from either Shandong or Luneng, I guess, and I believe we can win whichever title or cup or consumer award that we are eligible for.”

Pelle went on to state that the people he presumed must be his new team-mates had appeared to be a great bunch of lads and that what he had interpreted as morale was very high.

However, the ex-Southampton man became much more specific when he was asked about the financial side of the move.

“I will be paid £1,000 per second,” he revealed. “I will become the richest man in the known universe and I will own only the most exotic and treasured items in the word.

“The heavens and earth will be my playthings and all men will cater to my capricious whims. Plus I think there’s a goal bonus in there.”

Cristiano Ronaldo: In my fairy tales, the baddies win

The questions were then directed at the owner of Shandong Luneng, Sun Hua, who expressed his excitement at the capture of a man he guessed must be one of the best strikers in Europe.

“This commodity [Graziano Pelle] must be of the highest grade [very talented] judging by its [his] price tag,” he told FFT.

“It had better score many goals or I will send it to toil in the salt mines for all eternity [loan him to Sunderland].”

Please note: This satirical story is not real. But you already knew that, right?