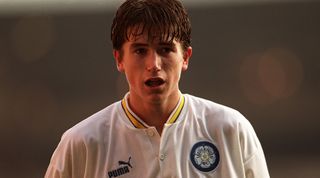 This was my debut, at 17. I was called into a meeting with great players like Gary Speed and Gary McAllister, then learned I was in the team and everyone congratulated me. Moments like that are priceless. When I played, I thought: ‘Oh my God, I want some more of this.’

We qualified for a first World Cup since 1974. After we lost the first leg 1-0, Guus Hiddink benched me. Within 30 minutes I was on. We scored and then won the shootout. When John Aloisi scored the final penalty, I stood, arms raised, and saw the crowd cheer. I won’t forget it.

To score the goal that put my country into the last 16 of the World Cup for the first time was an amazing feeling. We went behind twice but rallied and deserved to go through. Graham Poll showed one of the Croatia players three yellow cards and then disallowed our third goal, but we got there in the end!

This was my final game. You never want to give it up, but I was picking up niggly injuries. Finishing my career in my home country, and being able to walk out with my four kids to a guard of honour, was something special.

This feature originally appeared in the October 2016 issue of FourFourTwo. Subscribe!