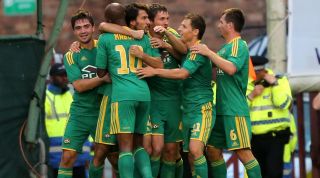 These days there are barely 15,000 living in Khoiniki, a fairly unremarkable town of ragged Khrushchyovkas in southeast Belarus. Or, to give it a more readily identifiable setting, Chornobyl is just 40 miles away.

The population had been double what it is today when Viktor Goncharenko grew up there during the eighties, but Khoiniki and its environs were among the areas worst affected by the Chornobyl nuclear disaster.

His father Mikhail worked as an engineer at its power station and was among those who initially stayed behind after a reactor exploded in the early hours of 26 April 1986, sending a highly radioactive plume of material into the atmosphere. Over the years Mikhail’s health suffered, and he passed away in 1993. Fittingly, Viktor inherited his great enthusiasm for football.

Together they would watch the Soviet championship on television – Dinamo Minsk, the republic’s sole representative in the top flight, won the league in 1982 and reached the quarterfinals of the European Cup the season after – but the Goncharenko family home was near Khoiniki’s stadium and both parents actively encouraged their son to take up the game.

At nine they enrolled him in a local football school. Things changed when Mikhail died; His mother and sister moved towns but Viktor, then 16, went off to the Republic College of Olympic Reserve in Minsk where he began to show signs of becoming a talented defender. In 1998 came a career-defining move to Bate Borisov.

Ultimately, he came to personify the club in the modern era. Although founded in 1973 as a works side at a local factory in Borisov (BATE stands for Borisov Automobile and Tractor Electronics), BATE were re-established in 1996 by new sponsors who oversaw a rapid rise from the third tier of Belarusian football. Twice, in 1999 and 2002, Goncharenko won the Premier League with BATE, but the second title was blighted by a serious knee ligament injury sustained in training that ultimately ended his career at 25.

But with that passion passed down from his father and an unspent energy, he didn’t stay out of the game for long. Goncharenko began coaching BATE’s reserve side, before becoming first-team manager Igor Kruishenko’s assistant in 2007. That year, though, Kruishenko suffered health problems and Goncharenko took temporary charge of the side, winning five out of his six matches. When Kruishenko then departed for Dinamo that winter, the board gave him the job permanently, aged 30, and over the past six years has gone about earning a reputation as one of eastern Europe’s most talented young managers by forging a side strong enough to win the league virtually every season.

Under Goncharenko’s stewardship, BATE have won each of the five previous Belarusian league titles and he leaves them well-placed to clinch another. What’s more, in 2008 the then 31-year-old became the youngest manager in Champions League history. That season was the first of three appearances in the group stages for BATE, where Goncharenko helped put the club on the map and further enhance his own burgeoning reputation by dealing admirably with the step in opposition and recording victories over Bayern Munich and Lille, not to mention draws against Juventus (twice), AC Milan and Zenit St Petersburg.

An intelligent and articulate man whose side were renowned for their smart football, Goncharenko’s peers point to an irrepressible energy and great thirst for knowledge; indeed, he often spends his holidays at clubs in western Europe picking up new ideas and shadowing coaches with more experience.

For some time now, Goncharenko’s name has been linked with teams in Russia and Ukraine, and it was very much a case of when, not if, the ambitious 36-year-old would try his hand in a stronger championship.

Krasnodar seems a logical starting point. After all, only a year or so ago there were no Belarusian coaches in Russia’s top flight, but now there are three and they all arrived in the southern city.

Leonid Kuchuk, who made a name for himself at Sheriff Tiraspol in Moldova and then took Ukrainian side Arsenal Kyiv into Europe, was at Kuban Krasnodar last season, guiding them to a club-best fifth-place finish, securing Europa League football, including Thursday evening's match with Swansea. He’s since moved on to Lokomotiv Moscow. Then in August, Oleg Kononov, another Sheriff old boy who did a good job in Ukraine with Karpaty Lviv, joined FC Krasnodar, the city’s other Premier League side.

Arguably, Kuchuk’s success was born out of the solid foundations laid by Dan Petrescu. Kuban are one of Russia’s oldest clubs and their attendances the highest in the league, but they had garnered a reputation as something of a yoyo side until the Romanian, now at Dinamo Moscow, arrived. There was stability with Petrescu at the helm, something not generally associated with Kuban, who have gone through a seemingly endless stream of managers. Goncharenko is the club’s 15th coach in just seven years. His predecessor Dorinel Munteanu was dismissed on 12 October after just two and a half months, with sat Kuban 11th in the table.

Goncharenko is a good coach, of that there is little doubt, but he needs time. He arrived under two weeks ago and in his first match – Sunday’s 3-1 defeat at Dinamo – played his preferred 4-2-3-1 formation, but in recent times has shown a flexibility tactically. For such a young coach, Goncharenko brings great experience and, crucially, the ability to sculpt a team on a budget and work with younger players. Aliaxander Hleb sees something of Arsène Wenger and Pep Guardiola in him.

Kuban can’t match the big budgets of the league’s top sides and in recent times have been savvy in the transfer market, bringing in players and then selling them on for a profit. In that respect, Goncharenko is a good fit. Kuban picked up lanky striker Lacina Traoré for around £3.5m in 2011 and sold the Ivorian to Anzhi Makhachkala for £15.8m last year, and have also lost the likes of Sergey Davydov, Aleksei Ionov, Vladislav Kulik and Aras Özbiliz; whether their replacements were adequate remains another question. Certainly there is a sense that Petrescu’s work has been undone to a degree.

But Kuban do have some good players. Goalkeeper Aleksandr Belenov is a reliable presence at the back, right-back Aleksei Kozlov is a Russian international, while Ángel Dealbert and Xandão form a good partnership in defence. Midfield schemer Ivelin Popov is a key man, as is midfielder Charles Kaboré. Up front, Ibrahima Baldé provides a threat and has scored five goals this season. Perhaps the only name familiar to fans in Britain will be Djibril Cissé. The former Liverpool, Sunderland and Queens Park Rangers centre-forward, with three goals to his name, hasn’t really lived up to expectations thus far though.

Of course, managing BATE in Belarus is a very different job to Kuban in Russia. BATE became the undisputed leader of Belarusian football and it is doubtful as to whether Goncharenko had a real crisis to deal with. That is hardly his fault, but Kuban aren’t expected to win every game like BATE and it represents a new challenge for Goncharenko.

He shared a good relationship with BATE owner Anatoli Kapsky and the relaxed atmosphere won’t exist at Kuban where he didn’t really experience too much pressure from the board, fans or media.

Similarly, he is walking into a very different dressing room. BATE’s success centred around mainly local players and they were very much a solid unit, whereas as at Kuban, Goncharenko has to deal with a multinational side with a dozen or so different nationalities.

There are one or two “buts”, yet Goncharenko is one of eastern Europe’s bright young things and can be a success at Kuban; he needs to be given at least a season to prove his worth. Perhaps, given the capricious nature of Kuban, this is the biggest obstacle he’ll face.