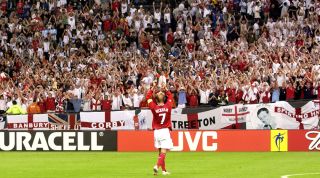 Chest pounding. Sweat dripping from his brow. Diego Simeone right up in his grill. Ball nestled on the penalty spot. Half-time seconds away. David Beckham stands roughly six strides and a ball strike away from redemption... or ruining my birthday.

It was a long journey to that evening in the Sapporo Dome in Japan. It started roughly a year earlier when I entered FIFA’s ticket ballot for the boringly named “team specific tickets” or “TST” as they are abbreviated throughout the arduous application process. Thing is, you had to enter the ballot long before your team’s qualification was confirmed. Part two of the journey was England vs Greece at Old Trafford.

Essentially, until Becks stuffed that free-kick (roughly his 734th attempt of the match) past the silver fox, Antonios Nikopolidis, I wasn’t going anywhere near the Far East. Sitting in my South London living room, watching the England team maul Golden Balls in a show of pure joy, the realisation dawned. My TST application was a go. I was going to the World Cup!

The draw for the championship meant that the game against Argentina was the second of England’s group matches, nestled between the significantly less interesting and exciting clashes with Sweden and Nigeria. After the Scando bash, the Argentina game was riddled not only with historical needle, but also present necessity: if England lost, their World Cup would pretty much be over. Add to that the fact it was my 29th birthday and there was a foreboding brew stewing in front of me.

To the day of the game. The Sapporo Dome is a mental venue. It’s got a roof (as its name suggests) and, as well as looking like a spaceship, the way it functioned was state of the art. The football pitch could be wheeled in and out of the stadium to let the grass see the light of day and also to allow the auditorium to be converted into a baseball stadium.

Walking up to it, wearing my new England shirt lovingly printed with my age and the fact my birthday was today, I had butterflies busting all kinds of moves in my gut. Brilliantly, just prior to leaving Blighty for the Far East, I’d contracted an ear infection, which had required antibiotics that had prevented me drinking… until this day. I took my last pill after breakfast on my birthday and by late afternoon I was beering it up in the Sapporo Beer museum.

With a touch of hop-induced courage swilling about, I entered the stadium and headed to my seat. The whole place was a giant patchwork quilt of St George’s flags hanging from every available vantage point. It was like a home game. Argentina as a nation were stuck in the mire of a crippling recession at the time and many of their fans were forced to stay home thanks to lack of cash. Hey-ho.

Having a roof the atmosphere in the Dome was stuffy and warm, something which only upped the mood of the supporters in the stadium. Kick-off approached and the two teams took to the pitch, England lining up with a few veterans from the showdown in 1998 – the key ones being David Beckham and Michael Owen.

England were certainly underdogs for the game, but once I’d been part of a booming national anthem and the game kicked-off, the Three Lions had the better of the action, taking the game to the Argentines.

It’s at points like this where the hope and belief start to creep in and the more gnarled and experienced fan would suppress these feelings. At that point in my life I hadn't had my heart bust enough times, so I turned to my traveling companion and said, “We’re going to win this!” while actually trying to not have a heart attack every time Argentina crossed the halfway line.

As the game wore on, Owen was particularly menacing as he made Argentine nerves wobble repeatedly, hitting the post at one point in the first half. Of course it was his run, which was brought to an abrupt halt that gave Beckham his shot to complete his redemption. The now-Tottenham gaffer Mauricio Pochettino, sporting a fantastic mullet-cum-rock hairdo, tripped Owen in his haste to neutralise the threat. The moment of truth arrived.

There’s something wonderfully paradoxical about a penalty being awarded to your team. The initial burst of great joy (occasionally accompanied by flicking Vs at opposition fans) is soon replaced by the dread and realisation that you’re actually going to have to score from the spot and, worse still, watch the whole bloody thing live. Suddenly the stifling atmosphere of the Dome became more oppressive.

Beckham set the ball down on the spot and it was clear even from where I was sitting (up the other end of the stadium) that he was struggling to keep his nerves under control. I could see his shoulders rising and falling as he took deep, deep breaths to try and get all his years of experience and practice to overthrow the sheer magnitude of the shot he was about to take.

As the ball left his boot, I was aghast. Way too close to the keeper. But then, YES! HE’S DONE IT! HE’S ONLY F***ING DONE IT! Cue chaos in the stands, the hugging and high-fiving of strangers and a thudding heart in my chest, that seemed to re-start only once the players were celebrating by the corner flag.

With hindsight, half-time was a welcome breather, because England came flying out of the traps in the second half, not giving Argentina much of a sniff initially. Then there was a passage of play which ended with a David Seaman save for which I would gladly have given him a big kiss had I been able to get on the pitch - an ill-advised cause of action with the ever-twitchy Japanese police looking on.

Much of the second half was spent watching through my fingers while willing the ball away from the England penalty area. Sheringham and Scholes both produced fantastic long-range volleys which brought good saves from Pablo Cavallero. By then though, the damage was done to the Argentines, Beckham’s redemption was complete - and the final whistle from Pierluigi Collina was like blowing out the candles on the best birthday cake a man could wish for.