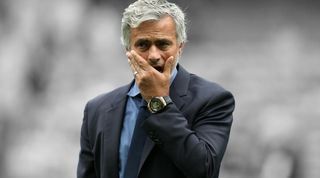 Porto were crowned Primeira Liga winners in 2004 but also suffered a painful extra-time defeat to Benfica – who they'd bettered by eight points in the title race – in the final of the Taca de Portugal. Mourinho’s response to such a loss was typically low-key, as he guided his team to a momentous Champions League final win 10 days later – a 3-0 trouncing of Monaco in Gelsenkirchen.

Chelsea slumped to what was then their heaviest, but only third, league defeat under Mourinho, away to lowly Boro. It was the Blues' first defeat in three months – before this they led the league by 15 points – and all the more surprising considering they'd shipped just 13 goals in the 25 matches that preceded it. Petr Cech let Fabio Rochemback's effort underneath him after just 78 seconds, before goals from Stewart Downing and Yakubu sealed Chelsea's fate.

Perhaps their heads were elsewhere: up next was a Champions League first-leg last 16 tussle against Barcelona, after all. Asier del Horno came in for Geremi and was sent off on 36 minutes for a clumsy tackle on Lionel Messi. Chelsea took the lead anyway, but a John Terry own goal and a Samuel Eto’o winner 10 minutes from time teed up a tough trip to the Camp Nou in which they could only manage a 1-1 draw. They came up trumps in the league, however, only slipping up to Fulham before clinching the title in style by beating Manchester United 3-0 with two games to spare.

Villa Park has been something of a nervy away trip for Mourinho in both of his spells in England. After an 18-game unbeaten league spell carrying over from the previous campaign, Jose's Premier League runners-up failed again at the fourth attempt in Birmingham, succumbing to goals from debutant Zat Knight and Gabriel Agbonlahor. It was a game that spelled the beginning of the end for Mourinho at Chelsea, amid rumours of a rift with owner Roman Abramovich. Days after the following game, a poor 0-0 at home to Blackburn two weeks later, Mourinho was gone and replaced by Avram Grant.

The Blues lost 2-0 to Manchester United in Grant's first game, drew 0-0 at home to Fulham in his second but rallied in their last 30 matches to lose just once (against Arsenal) and finish just two points behind United. John Terry's slip in the Champions League final gifted Fergie's lot Old Big Ears too, and Grant was gone.

Mourinho had only lost once in Serie A with his new Inter team when plucky Atalanta hosted the champions in early 2009. This defeat, however, would be a big one: Cristiano Doni's brace meant they were 3-0 down inside 33 minutes and only broke the deadlock in the 92nd minute through Zlatan Ibrahimovic.

Next up they faced Roma in the quarter-finals of the Coppa Italia. Mourinho reacted boldy, handing 18-year-old Davide Santon his competitive debut at San Siro and starting Adriano up front with Ibrahimovic.

It paid off: Ibra sent his team through to the semis, hooking one home after Adriano's opener was cancelled out by Rodrigo Taddei's equaliser. Inter lost only twice more before the season's end in Serie A and romped to the title by 10 points.

Mourinho’s first Clasico was indeed a classic – but for all the wrong reasons. For starters it brought about his first loss, but it could have barely been more humiliating than the 5-0 trouncing from los Blancos' most despised rivals. Real's roughhouse tactics backfired spectacularly as goals from Xavi, Pedro, David Villa (two) and Jeffren were complemented by a customary Sergio Ramos red card in injury time. They responded with six wins in a row in all competitions – including an 8-0 Copa del Rey demolition of Levante – yet went on to finish four points behind Barça despite plundering a whopping 102 goals in 38 matches.

Going into this game Chelsea had only dropped six points in their last possible 42, yet this defeat – Ramires and Willian were both sent off, while Mourinho himself was banished to the stands – sparked a peculiar run of form.

Although they bounced straight back, beating Arsenal 6-0 in the next game, losses away to Crystal Palace and at home to Sunderland spelled the end of their title challenge as Manchester City stole a march and scooped the title ahead of a bedraggled Liverpool.

By late November 2014, Chelsea already held an eight-point lead over Manchester City in the title race after a blistering start of 14 wins from their opening 19 matches. However, that lead had been cut by New Year's day when Tottenham became only the second team to hit five past a Mourinho side.

The immediate reaction was defiant – they beat Newcastle 2-1 (the only other team to best them up to this point) before going to Swansea and putting in their best performance of the season, winning 5-0. The Blues wouldn't lose again until having wrapped up the title, though Mourinho did seem to be somewhat scarred by the Spurs result (and also after conceding three to Everton earlier in the season) which led to a more balanced approach. Their next seven wins after Swansea came via one-goal margins, and taunts from opposition fans who tired of their gritty grinding.