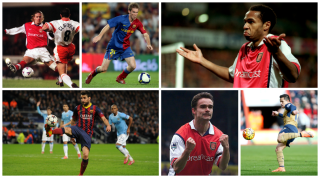 Arsenal and Barcelona have been intrinsically linked over the last two decades, both in the style of football played and the transfer of players between the two clubs. From stars of yesteryear such as Thierry Henry, to the here-and-now of Hector Bellerin and up-and-comer Jon Toral, there have been plenty to have graced both clubs. And Alexander Hleb.

Which of the following has been the most successful? We want YOUR view.