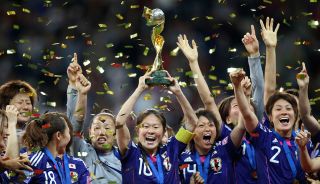 Find a source of confidence

In 2011, we didn’t start with much confidence that we could go all the way. But after we beat Germany in the quarter-finals, we started to think we had a great chance. Even when we played the United States in the final, the fact we had beaten Germany – in Germany – really helped.

Major tournaments can be draining, but even just looking at the smiles of my team-mates relaxes me. When we’re eating dinner and not training, I enjoy spending time with my team-mates. We relax, have fun; we are like a family, and have shared many great moments.

Do it for the people back home

We always wanted to do as well as possible, but then in 2011 there was the terrible earthquake. We wanted to do something for our country, so we gave everything we could. We were thinking about all of the people going through such a difficult time, and wanted to put a smile on the face of the entire country.

Don’t buckle on the biggest stage

Aside from being a special game, I thought the 2011 final in Frankfurt was a great opportunity to play with my team-mates on such a big worldwide stage. We just looked forward to the occasion, and really enjoyed it. We tried to treat it as a normal game. When the match first started I was a bit nervous, but I soon settled down. With the biggest games, there’s a nervousness when you get that first couple of touches, but after that it was fine. I believe that’s the same for all players; after the first touch, it becomes like any other game.

We beat the USA on penalties in the 2011 final. I’m always practising penalties, and most of my team-mates do the same. It is something we do as part of our regular training, individually and collectively.

This interview originally appeared in the July 2015 issue of FourFourTwo. Subscribe!