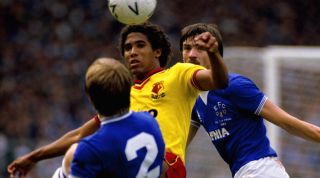 I was a 17-year-old boy playing non-league for Sudbury Court when Graham Taylor signed me. The move to the pro game came far earlier than I’d anticipated and I’d had little pre-season, so my first Watford game was in the reserves. But I scored after 30 seconds with a 25-yard shot and was straight in the first team after that. There were so few people watching that day, but to do something like that in the first minute of my debut was a real confidence boost for me.

Even though we lost, for Watford to reach an FA Cup final was so special. The team had risen from Fourth to First Division – I’d joined in the Second – and then this. I’d played at Wembley for England by then, but nothing could prepare me for an FA Cup final. The atmosphere was incredible. I remember Elton John coming into the dressing room; it was such a proud day for him especially, being chairman. I can’t even remember our suits, though – I’m sure they were nothing flash, certainly not like what I later wore with Liverpool! I had an early chance but that Everton team was very hard to beat.

Just to play at the Maracana was unbelievable because for me it represented the home of football. And it was there I scored the goal that people would see all over the world. Looking at it now, it’s like an out-of-body experience, as if someone else scored it. You can’t think about what you’re doing when you’re dribbling; all you can do is try to relax with the ball. So at no stage was that run planned.

I just kept on reacting to the person in front of me and before I knew it I was in front of their keeper. Although that dribble brought me to the forefront of people’s minds, my career didn’t push on for a while after that. People forget I was at Watford for three more years before I joined Liverpool.

People remember me for Brazil, but this was my best goal. QPR were top of the league and Ian Rush had just left so there was a lot of pressure on myself and Peter Beardsley. Everyone was wondering how we’d cope without Rush and he’d come back from Italy to watch the game – the fans were singing his name and that made us even more nervous.

But we won 4-0 and I scored two, with the first one hit from near the halfway line. There were a couple of nice one-twos for my second, but the first was the special goal. That was without doubt the best team I played in. We had a great season winning the league, although losing to Wimbledon cost us the Double.

The best team performance I’ve ever been involved in. I played many games when we played wonderfully in periods, but this was over the entire 90 minutes. Forest were near the top and had great players like Stuart Pearce and Neil Webb, but we put in a complete performance, like when Barcelona beat Real Madrid 5-0 [in November 2010]. Everything we tried came off. They even brought a video out of the game, which was very rare back then!

This feature first appeared in the August 2011 issue of FourFourTwo magazine. Subscribe!