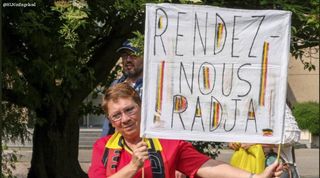 Nainggolan was cut from Roberto Martinez's initial 28-man World Cup squad on Monday, which sparked a negative reaction on social media – so much so that a protest was organised on Facebook to complain about the Spaniard's decision.

The event, scheduled for 5-6pm on Tuesday, was supposed to attract a large crowd, with Brussels police insisting they would be prepared for a big turnout. They didn't need to worry too much, however – in the end, there were almost as many journalists as fans.

According to Belgian newspaper HLN, only 23 of the 9,000 who clicked 'going' on the Facebook event page turned up to make their feelings known towards Martinez and the Belgian FA. Another 30,000 had said 'maybe'.

A heavy rain shower may have been among the reasons for a low turnout, while the event organisers marked the rally as cancelled shortly before it was due to begin.

Five-year-old Massimo was one of those in attendance with his father, who had travelled more than an hour to reach the protest.

Super-fan Snr., Michael Cleiren, said: "Yes, we are a big fan of Nainggolan at home. We have even seen him in real life. It's a bit disappointing, so few people. But Massimo has never seen the Atomium [tourist attraction]."

Supporter Willy Mahoudens, who travelled in from Aartselaar, added: "I didn't expect 8,000 men, but a few hundred. But I'm glad that I'm here. I've done what was decided in my heart."

Will Smith will perform the official 2018 World Cup song