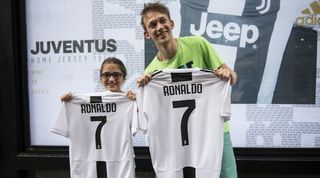 Real Madrid's greatest ever goalscorer moved to the Serie A club earlier this week for £88m on a four-year contract that will see him earn around £26.5m a year after tax.

But as everybody knows, the name Cristiano Ronaldo brings plenty of marketing, sponsorship and merchandise opportunities - and Juventus are already reaping the early rewards.

According to Yahoo Sports in Italy, 520,000 shirts featuring Ronaldo's name and number were sold online and in-store in the first 24 hours of his move being announced.

Just a few hours after Ronaldo's transfer was made official on Tuesday evening, the Juventus website crashed due to the heavy demand and didn't come back to life until mid-morning on Wednesday.

A Ronaldo shirt with the five-time Ballon d'Or winner's name on the back costs £92. And although a significant percentage of that money will go to the shirt manufacturer, Adidas, the famous sportswear brand will surely want to build on their flourishing relationship with Juventus.