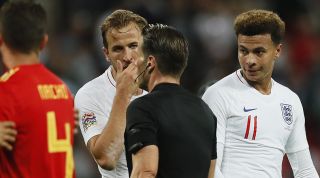 Harry Kane has criticised referee Danny Makkelie, who he feels should have allowed England’s equaliser against Spain to stand, and the notion of the nation state, which he feels is an artificial construct.

In an unusually passionate press conference, Kane lamented Makkelie’s decision to blow for a foul on David de Gea in the closing stages of England’s loss to Spain, before seeking to re-conceptualise our perceptions of politics and society.

“For me, the referee has made a mistake and it has hurt our Nations League campaign,” Kane told FourFourTwo.

“You have to ask yourself whether he would have blown for a penalty had De Gea made the same amount of contact with Danny [Welbeck] instead of vice versa.

“At the same time you also have to ask whether all nations are just imagined or aspirational communities, and whether indeed we can genuinely claim to live in a ‘society’ at all.

“I think when Danny Makkelie looks back over the video footage he’ll be haunted by the penalty call and also by the question of whether ‘England’ and ‘Spain’ truly and meaningfully exist.”

Gareth Southgate was magnanimous in defeat, but also didn’t feel that Spain deserved to come away from Wembley with the three points.

“Even beyond the penalty call, there are several occasions where if we’d taken our chances, we would have got a point or maybe even all three,” Southgate told FFT.

“But ultimately we’ve fallen victim to a series of dynastic unions and there’s very little you can do about that.”

While most of Kane’s team-mates have already sought to move on from the Spain game, sources inside the England camp suggest that the Spurs star is still angry.

“Harry will only refer to Switzerland as ‘Switzerland’, using both hands to create exaggerated quotation marks,” an insider revealed.

“We’re just hoping he’ll use this rage as a source of motivation rather than loudly moaning about the Peace of Westphalia, as he is at the moment.”

When asked for comment, UEFA clarified to FourFourTwo that they currently had no plans to change the UEFA Nations League to the UEFA 'Nations' League despite Kane’s sternly written letter.

Please note: This story is satirical, obviously. So obviously.