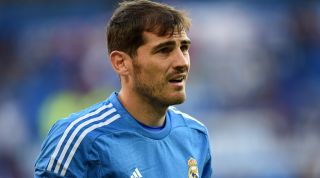 For those already a little bored of the whole Superstars-R-Us, ‘look how shiny they are!’ vibe from Real Madrid, then LLL can offer up plenty of other distractions to keep the side watchable for another year.

Will the Alvaro Arbeloa-Iker Casillas spat come to fisticuffs? Who would win? Will Cristiano Ronaldo turn up for team photographs on stilts next time? Is Gareth Bale turning into Vin Diesel? Will James Rodríguez be shoved onto the bench once the season gets going and Florentino Perez loses interest? Who can stop them winning the league? In theory, no one. But LLL said that last year.

Chunks of La Real continue to be taken away. Asier Illarramendi moved to Real Madrid last season, and this year Antoine Griezmann headed to Atlético. At least the fiery, flamboyant Frenchman stayed in La Liga. Claudio Bravo was lured to Barcelona, but keepers are a little more replaceable, as Casillas is about to find out again at the Bernabeu this season.

Better news in San Sebastian was that the club managed to permanently sign Arsenal's Carlos Vela, who is a rather fine striker. The defence is still solid, while there's talent in midfield with Esteban Granero, Sergio Canales and Rubén Pardo. LLL is not sure the team is up for a Champions League chase, but a Europa League spot should definitely be a target for fun nights out against plucky outfits like Tottenham and er, Hull.

Interesting. Very interesting. They're Europa League winners don'tcha know; an obvious prize for one of the better seventh-ish finishing sides in Europe. Better days may be ahead for Sevilla, though, with a Champions League push on the cards if Unai Emery gets his tactical elbow patches in line.

Ivan Rakitic has gone, however, which leaves a huuuuge problem in midfield. Ever Banega is not quite the man to replace him, but Emery got some decent performances out of him in their Valencia days. Fazio is still in Andalusia to continue to be one of the most admirably dirty players you ever did see. Meanwhile, the forward line is one of the tastier in La Liga with Carlos Bacca and on-loan duo Gerard Deulofeu and Iago Aspas (the latter attempting to forget a lost year at Liverpool).

Now that was a mad summer, even by Valencia’s standards. There was the traditional change of manager – par for the course – with Nuno Espírito Santo coming in as the second-best Catholic-tinged name in La Liga. The winner of that particular prize goes to Jorge Resurrección Merodio, better known as Koke. Thankfully.

The club also has a new owner in supposedly billionaire Peter Lim, although the dots and what-not are still to be penned on the deal with the club’s many creditors. Although the ubiquitous super agent, Jorge Mendes, is poking about the the club – and pretty much the whole of La Liga – the team are still waiting for that big signing to get their notoriously chilly supporters warmed up. The latest odds are on Alvaro Negredo being the man to fill the No.9 shirt, and oust Helder Postiga who still lingers like an old trump.

A fairly stable summer of... er, stability for Villarreal – and that’s exactly how those running the show want it. Not too much movement in terms of the starting XI jumping ship, and not too much to crow about coming in.

Villarreal relied on a truly blistering start to keep them well afloat last year. While the momentum from what had been a great run in La Segunda was the key to last year as confidence was built quickly, experience and that magic word 'stability' should see the Yellow Submarine comfortably hanging about eighth spot in their second year back.