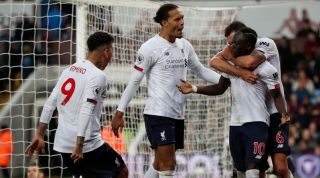 Sadio Mane’s late header at Villa Park was further proof of Liverpool’s powers of recovery. Three days on from clawing back that late deficit to Arsenal in the EFL Cup and less than a week after winning from a goal down against Tottenham, Jurgen Klopp’s players were at it again.

And that, of course, will encourage another round of whimsy. The "Mentality Monsters" brand that Klopp founded is particularly effective within Liverpool’s fanbase, mainly because it’s so susceptible to that kind of ethereal stargazing.

The result is an increasingly firm belief in destiny and fate and all the other romantic energies which tend not to have a place in modern football. As time goes on, though, and this team’s reputation for snatching results grows, the more plausible a non-literal explanation actually becomes.

Mentality Monsters? Alliterative, simple; that sounds like something which has been workshopped. It’s not a phrase which would roll off the tongue of anyone speaking English as a second language, so it had to be by design – a made-for-social media soundbite and an easy hashtag. Maybe that's too cynical, but it's certainly not a surprise that something so important to Liverpool's revival has acquired such a clever frame.

Whatever the case, this is an area of Klopp’s work which warrants more acclaim. His first great installation was Liverpool’s shape and tactical approach. First came the knowledge, then the conditioning, then the marriage of the two to power the fearsome gegenpress.

To supplement that, though, Klopp has been busy finessing a reputation which, over time, has become equally fundamental.

December 2015 might have been his low point in English football. Following a 2-2 draw with West Brom at Anfield, Klopp marched his players to the Kop to celebrate a rescued point and - naturally - he was ridiculed for it, coming as close to parody as he ever would again.

Referring back to that moment, speaking in 2018, he described it as part of the process of building a relationship between the supporters and the side. What it also did, was draw attention to something that Klopp would have wanted to establish as a Liverpool trait. That they were resilient, that they were never beaten.

Mining those associations from an unremarkable draw with West Brom was contrived, clearly, but in hindsight it does seem like the start of a different sort of strategy – one which reached maturity the night of that fabulous performance against Barcelona at Anfield and which continues to pay dividends to this day.

Klopp – like Jose Mourinho and Pep Guardiola – says nothing by accident. It’s not a coincidence that he has so often been keen to praise his team’s attitude or quick to identify their intangible strengths. Mentality Monsters? That was almost a patenting exercise. Maybe it wasn't quite that deliberate, but it was still an attempt to capture and label what had just happened against Barcelona, establishing it as a trait his side possessed.

Football teams have personalities, they have habits and trends, and this, Klopp was saying, was Liverpool's.

Assigning that capability a precise value is very difficult, but it certainly seems to multiply the effects of Liverpool's attritional football. Not only are they a physical proposition, they're also becoming a psychological one too. If a team shows itself to be consistently capable of recovering points from unlikely situations, that almost becomes a part of every other side's muscle memory too. Over time, those sides come to expect the same fate.

The more pronounced Liverpool's legend becomes, the more that subconscious fatalism grows in their opponents. It's a tremendous advantage and Liverpool's players perform as if they're aware of it. That’s plainly evident in their football and in the way they create and sustain pressure. But just as crucial is the clear sense that these other teams share that understanding. They too seem to believe in pre-determined outcomes and, increasingly, that's manifesting in errors which could generally be described as acts of self-harm.

It's a startling trend. As well-earned as Liverpool’s late goals generally are, it can’t be a coincidence that so many of them have depended on bizarre defending, terrible misjudgements or systemic breakdowns. Beyond the latest oddity of seeing Sadio Mane winning a free header in the Aston Villa box, there have been plenty of examples just within the past few weeks.

It’s too clear a pattern just to attribute to incompetence. Liverpool are given late goals so often and in such preventable ways, that the only explanation has to depend, partially at least, on the weight of their reputation. The more of these goals they score and the more their head coach amplifies what they demonstrate, the more self-defeating the defending they face seems to become.

It’s the power of assumed inevitability and Liverpool definitely have it.

QUIZ Can you name every player to score 10+ Premier League goals for Liverpool?

ANALYSIS Six of the biggest jobs in Europe could be up for grabs – will Jose Mourinho be on the shortlist for any of them?