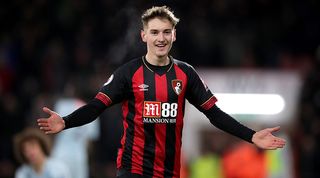 It takes more than a good starting eleven to fight on all fronts and few coaches know that better than Jurgen Klopp. While the German used the joint second fewest players across a title winning Premier League campaign (24), Liverpool fell hopelessly short in the cup competitions, as key players became jaded at crucial moments.

That will not be tolerated again next campaign and is the reason a £35m move for David Brooks - reported by The Star - makes perfect sense. Bournemouth’s Welsh midfielder is seen as the ideal replacement for Adam Lallana and it’s not hard to see why.

The Reds manager has always been a huge admirer of Lallana's intelligence, industry and patience when it came to playing time, and he was sad to see the 32-year old leave on a free transfer to Brighton this summer.

😁 It’s official! ✍️ Albion are delighted to announce the signing of Adam Lallana on a three-year contract!#BHAFC 🔵⚪️July 27, 2020

“He is one of the most important players of the time since I am here so I wish him only the best for the future,” Klopp told reporters in July. “From my point of view he is already a legend here.”

Reports that Xherdan Shaqiri may also be sold, with the Swiss international demanding more playing time than Klopp can offer, are another reason the Brooks deal makes sense.

Comparisons between Lallana, specifically, and Brooks are obvious. They’re both elegant wide forwards who can also operate centrally, good with the ball at their feet and thrive as part of a quick counter-attacking unit.

If anything Brooks is actually better in terms of output. The 23-year-old was one of the standout young players of the 2018/19 season, his first at Premier League level, scoring seven goals in 30 appearances. Injuries slowed his progress last campaign, but he is still considered an exciting talent.

At such a young age, Klopp knows he will be buying a player who he can mould, still in his prime learning years, and desperate to make the step up to a top club. Brooks could provide cover for Mohamed Salah and Sadio Mané, and allow Takumi Minamino more time to adapt to English football before ultimately bedding down a place in Liverpool’s front line. It’s a move that could be the key to Klopp fighting on all fronts next season.