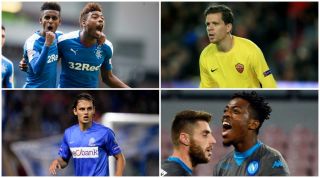 After wandering around the Championship for several years, a summer loan move to Napoli seemed a major break for Chalobah. Not only would he be tested in a fiercely pressurised environment, the midfielder knew he would be competing with Marek Hamsik, Jorginho, Allan, David Lopez and Mirko Valdifiori for his place in the side.

It’s perhaps not surprising, then, that the England Under-21 international has struggled. Chalobah’s only played for two minutes in Serie A, although he did score against Legia Warsaw in one of three Europa League outings. With the 21-year-old clearly surplus to requirements at the San Paolo, fellow Serie A outfit Carpi have expressed an interest in taking him for the remainder of the campaign.

Christensen has taken giant strides towards fulfilling his potential this term after featuring heavily at the heart of Gladbach’s top four-challenging defence. The Denmark international has exceeded all expectations in his debut senior season, missing only four matches in all competitions so far.

The 19-year-old was named Gladbach’s player of the month for October after helping his team record six consecutive wins. He’s also come out on top against Robert Lewandowski’s Bayern and helped the Bundesliga outfit concede just once in two matches against last year’s Champions League finalists Juventus. The future looks bright for Chelsea’s young stopper.

Solanke became the fifth Blues player to move to Vitesse in the summer, taking the No.9 shirt upon arrival. The 18-year-old has notched five goals in 15 league appearances so far, helping the club reach the dizzy heights of fifth place.

Former Vitesse defender Ferdi Vierklau even said Solanke “is reminiscent of Zlatan Ibrahimovic”, having seen the iconic Swede up close and personal when the pair were both at Ajax. Although the Basingstoke-born frontman has a long way to go before justifying those comparisons, his technical ability is excellent and the Eredivisie is proving a good testing ground for him to hone his art.

After an impressive six-month stint in the Championship with Fulham last term, Fofana was sent to his home country in the summer to continue his development. Bastia have struggled – they currently sit just three points above the drop zone – but the France U19 international has become an ever-present in the engine room.

Playing as a defensive midfielder, Fofana has recorded an impressive 86.4% pass accuracy and averages 2.2 dribbles per match, showing he’s more than just a robust ball-winner. The 20-year-old’s neat volley against Troyes showed an opportunistic eye for goal; with 19 appearances to his name already, the youngster appears sure to benefit from his time in Corsica.

Genoa hasn’t been a particularly happy place this season, but City starlet Ntcham hasn’t looked out of his depth after making the unusual and testing leap from Under-21 Development League to Serie A.

Although the man labelled as City’s answer to Paul Pogba has yet to make the same impact as his compatriot in Italy, he’s certainly settled well under Gian Piero Gasperini. With 14 appearances in Genoa’s first 18 top-flight matches, Ntcham has proven himself capable in his new environment despite the Grifone’s struggles, with the club looking over their shoulders at the relegation zone.

City clearly believe in Unal’s potential, having handed Bursaspor around £2 million to bring the youngster to the Etihad Stadium last summer. His breakthrough Super Lig season last year earned him a senior Turkey cap as well as a move to City, but Unal hasn't yet made an impact in Belgium.

While his club have consolidated themselves in mid-table, Unal has struggled to make an impression when given the chance. A goal and assist against Oostende in October looked to be a good starting point, but Unal has since found himself back on the bench on a regular basis.

OK, so he's not a kid anymore. But Petr Cech’s arrival at Arsenal in the summer seemed to spell the end for Szczesny, who promptly joined Roma on loan.

The Giallorossi have had highs and lows – from brilliant early-season form and qualification from a tricky Champions League group to fan protests, a humiliating cup exit and a 6-1 hammering by Barcelona. The Pole’s record has been similarly mixed, with former Juventus custodian Stefano Tacconi appearing to hit the nail on the head when he labelled the Pole an ‘uncontrollable lunatic’.

American midfielder Zelalem has made quite an impact under Mark Warburton in what is being described as the most exciting Scottish Championship season ever. With the Gers battling hammer and tongs with Hibs for a return to the top flight, the 18-year-old has chipped in with three assists since his arrival, including one on his debut against Queen of the South.

Warburton recently confirmed that Zelalem has extended his loan until the end of the season, underlining the important role he’s playing in Rangers’ promotion bid. Regarded among Gunners fans as one of their brightest prospects, the teenager appears to be benefiting from Warburton’s tutelage in Glasgow.

After breaking into the United first team under Louis van Gaal in 2014/15, hopes were high for academy product Blackett. Having dropped out of the reckoning in the second half of last season, though, a summer loan to Scottish champions Celtic seemed sensible: not only would he be given more opportunities following Virgil van Dijk’s Southampton switch, he would also be part of the Bhoys’ European exploits.

Neither the player nor the club’s season has gone as planned, however. Celtic crashed out of the Champions League in the qualifiers before being dumped out of the Europa League, and the 21-year-old centre-back has rarely featured, making only three league outings and failing to even earn a space on the Parkhead bench since October. Amid reports of a recall, Celtic boss Ronny Deila affirmed: “We haven’t heard anything about him going back.”

Regarded by many around Old Trafford as one of the club’s hottest prospects, Januzaj’s direct attacking style has arguably been missed in a misfiring United team this term. More frustrating still for fans of the Red Devils is the fact that the Belgian failed to cement a regular spot under Thomas Tuchel, and has subsequently ended his loan early at Signal Iduna Park.

The 20-year-old has more goals in the Premier League this season (one) than in the Bundesliga. With three assists and a blank scoresheet to his name after 12 appearances, it’s fair to say things didn't go quite as expected.

The Sevilla academy graduate has continued his football education in his homeland after last year’s spell at Malaga. The 23-year-old has already bettered last season’s goal and assist tally before the turn of the year, with two of each recorded so far.

Alberto has been central to Depor’s challenge for a European spot, playing in a variety of attacking roles and impressing in them all. His goal and assist in a 3-1 win over Rayo Vallecano early in the season showed the clearest evidence yet that Liverpool have a match-winning talent on their books.

After arriving at Anfield for a hefty £17.5 million in the summer of 2014, Markovic didn’t enjoy the easiest debut season in England. The Serbian has enjoyed more regular game time in Turkey, with his form impressive enough for reports to emerge that Jurgen Klopp wants him back in January.

This would require the consent of Fenerbahce and therefore seems unlikely, with the Serbia international proving to be an important part of their title challenge. A goal against Celtic in the Europa League and two league assists are a good platform to build on going into the second half of the season as Markovic looks to put his inaugural English campaign behind him.

There are high hopes among pockets of Liverpool and Wales fans that Ward could one day become their No.1 between the sticks. Luckily for them, the 22-year-old’s performances under Derek McInnes this term have been superb, and Dons fans will be reluctant to see him go at the end of the season.

Ward has helped Aberdeen build on last season’s achievements, becoming the first name on the teamsheet as they keep the pressure on Celtic and continue to establish themselves as Scotland’s second team. With 10 league clean sheets already this season – as well as a taste of European football during three Europa League qualifying rounds – Ward’s spell at Pittodrie promises to be a crucial part of his development.

Oduwa’s fleet-footed antics since first pulling on a Gers shirt has resulted in many a YouTube homage. The winger has the ability to both excite fans and confound defenders; with five assists and one goal in 15 league appearances under Warburton, the 19-year-old has been a revelation in the Scottish Championship.

In addition to honing his technical skills, Oduwa has been learning at the school of hard knocks. A rash challenge by Livingston’s Kieran Gibbons exemplified the rough treatment the England U20 international has suffered in a physical league, but the Spurs’ youngster has hitherto risen to the challenge.