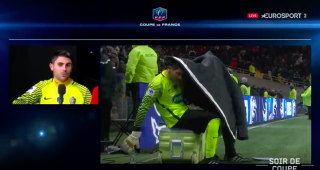 There was a big shock in the French Cup on Tuesday night, with Championnat National (third tier) side Les Herbiers knocking out Ligue 2 Lens on penalties.

The match ended in a goalless draw before Les Herbiers went through 4-2 after a shootout, with 21,146 fans watching on at Nantes' Stade de la Beaujoire. Les Herbiers' Stade Massabielle only has a capacity of 5,000, so the fixture was switched to a larger venue for the last-eight clash.

As usual, the goalkeeper was the hero - but Matthieu Pichot owed it to some unusual research before the nail-biting finale.

That's him talking about his preparation - which involved watching a Gigi Buffon highlights video, replete with motivational music, on a tablet. And, yes, all while huddled under a big substitutes' jacket.

And here's the game itself, with the shootout at around the 2:30 minute mark. The penalty saves he makes are decent enough, but the match itself was full of excellent goalkeeping.

Les Herbiers are joined in the semi-finals by fellow minnows Chambly from the third tier, plus PSG and one from either Caen or Lyon (who play tonight).