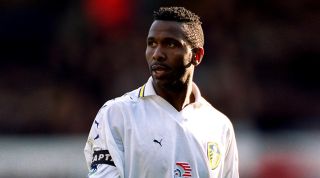 The Soweto Derby is a great game to play in and means so much to the people. Unfortunately, the game I remember most was for the wrong reasons – 42 people were killed. It was held at the Orkney Stadium and about 10,000 too many fans got in. There was a terrible crush. We saw bodies everywhere, including children.

It was very upsetting. It changed my life because I thought: 'We have to look after the supporters better'. I’ve always tried to be good to fans ever since, and give them my time.

On my debut for Leeds, my manager Howard Wilkinson got me to play on the wing. I’ve no idea why, because I wasn’t a winger or even that fast! It was strange and I kept cutting inside. The English game was so quick compared to what I was used to, and it was pretty difficult for me.

But the atmosphere was fantastic and I knew I was going to enjoy playing in England – as long as I could play in my proper position...

Returning to international football in 1992 after apartheid was fantastic, and our greatest moment was winning the 1996 Africa Cup of Nations. The side had developed together for a long time and we’d had some bad results. Winning the tournament was the making of us – Bafana Bafana were national heroes.

We beat Tunisia in the final at Soccer City and the atmosphere was incredible. We met Madiba [Nelson Mandela] before the game, which was inspiring, and a lot of the nation’s cricket and rugby stars were there. It brought the country together.

Our goalkeeper, Mark Beeney, was sent off after 16 minutes at Old Trafford, and Howard Wilkinson never picked a sub keeper. I used to like messing around in goal during training, so I found a green shirt thrown over my head. I ended up playing a good game. I made two great saves, one from Ryan Giggs and one from Brian McClair, but Roy Keane eventually scored.

At the end, I got clapped by some Manchester United fans – quite something for a Leeds player!

We’d lost 2-1 in Moscow, so we knew a 1-0 home win would get us through to the next round of the UEFA Cup. It was a tight game and with five minutes left we were pushing for a goal. I came up for a corner right at the end and I met Stephen McPhail’s cross to get the winner.

I didn’t score many, and I can still replay that moment in slow-mo. Elland Road erupted. It was a career highlight – I enjoyed my time there so much.

This interview originally appeared in the November 2010 issue of FourFourTwo. Subscribe!