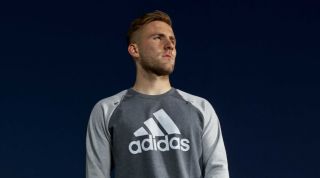 At the start of the season, could you have imagined things going this well?
I'd say no. I thought I was going to improve in my performances, but I never could've imagined I'd get my first England cap at the age of 18. I didn't think about England at all. I was with the under-21s and I was focusing on that. Going away with England was a great experience, and I want more of that.

At Southampton we were focusing on the Premier League and finishing as high as possible, and I think we're achieving that at the moment, but we've still got three games to go so hopefully we can push up the table a bit more.

How have you found being in the spotlight at such a young age? Has it been a little overwhelming?
Yeah, at times, but I don't really focus on that. I tend to focus on my football, not the media side of it. Obviously I get stuff sent to me on Twitter, and I see things written about me, but I try not to focus on that and just play my football.

I get people recognising me in the street, but I don't mind that – it's part of being a footballer. I enjoy that stuff, especially around where I live where I think people are proud of what I've achieved.

Is it difficult to stay grounded?
Yeah, it is, but at Southampton we're brought up to deal with that. You've obviously seen the lads that have come through; Bale, Walcott, Chambo [Alex Oxlade-Chamberlain] – they've all stayed grounded. Everyone that comes through at Southampton gets taught what to do, not just on the pitch, but off the pitch too.

We've got a great coaching staff at Southampton, especially in the youth system. I'd say it's like a family club – everybody's friends there. We know how to act if we get moved up to the first team, and people like Prowsie [James Ward-Prowse] and Calum [Chambers] have taken it in their stride and done really well.

So presumably guys like Bale, Walcott and Oxlade-Chamberlain are role models for you?
You just look at Gareth Bale – he's just broken the transfer record is undoubtedly one of the best in the world along with Ronaldo and Messi – and that's someone I look up to, because he was a left-back at Southampton. Watching him and seeing what he's achieved just pushes me on even more.

A few people have said to me that I could move up and play on the wing, but at the moment I'm just focusing on playing as a left-back. You could say I'm pretty much a winger at Southampton anyway, especially with the gaffer liking to get his full-backs forward.

Is there anyone else you've tried to model your game on?
Ashley Cole was the main one because as a youngster I supported Chelsea, I think people know that. He's been undoubtedly the best left-back in the last 10 years, and from watching him I learned a lot. When I went away with England he spoke to me and said a few good words, which were nice to hear from him.

How big an impact has Mauricio Pochettino had on your success?
He's had a massive impact. He's helped me improve not just on the pitch, but off it as well. It's a hard thing for a young player like me to be involved in the first team – espcially with the England stuff – but he's helped me massively and I feel I can keep on improving with him as my manager.

His training methods are very intense and that's really helped me with my fitness and strength. When I was younger I always used to get cramp around the 75th minute, but now in matches I feel fitter and stronger and am able to go the whole 90 minutes.

Who are the next batch of Southampton youngsters we should watch out for?
There's a few – some have been training with the first team recently. There's another left-back, Matty Targett, who's been doing really well in training. There's also Harrison Reed in midfield, who's getting close and has been on the bench a few times. Sam Gallagher has made a few substitute appearances and scored his first goal against Norwich recently – he's going to be a very good player too.

Did having other Southampton players in the squad help you settle into the England set-up?
Massively. If I went there as just the one Southampton player I think it would've been hard to fit in with the group, especially as an 18-year-old. But I felt comfortable there with the other lads.

This is the best I've ever seen Adam Lallana play; he's deserved his England chance and taken it well. You can see in training the ability he's got, and he's still improving. He can go to the very top and if he does go to the World Cup he'll be a big player for England.

Rickie Lambert's been exceptional for us this season too – he's been amazing the whole time he's been here. He's not got the pace of someone like Jay Rodriguez, but he's got the strength, the goals and the vision. You've seen some of his assists this season, they've been world class. Everyone at the club was very proud when he scored against Scotland, but it didn't change him at all. I knew how much it meant to him, and I was so happy for him.

How do you rate your chances of making the World Cup squad?
I don't really rate them at the moment – I've still got three games left and I'll see how they go at the end of the season. Obviously, it won't be my decision, it's up to Roy Hodgson. But if I don't go, I'm still 18, I've got plenty more years to go.