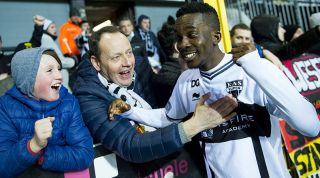 Henry Onyekuru, the Nigerian prodigy who is about to celebrate his 20th birthday next week, has been the revelation of the season in Belgium for newly promoted Eupen.

His 12 goals in 28 regular season matches earned him plenty of attention at first, but he followed them up with another 11 in 10 games during the play-offs for a Europa League spot. His form over the last two months was nothing short of sensational. Add nine assists, and you get an incredible record.

It’s hardly surprising that 10 British clubs – nine from the Premier League, plus Celtic – had reportedly targeted Onyekuru this summer. The latest stories suggest that Everton have landed the youngster, and will loan him out to Anderlecht for next season.

The small club from the German-speaking region of Belgium was taken over by Qatar’s Aspire Zone Foundation five years ago. A very curious business established in 2004 by the very top government officials, Aspire is supposed to promote football all over the globe, and apparently puts emphasis on Africa.

The Qataris built a state-of-the-art Aspire Football Dreams academy in Senegal, and describe it as a humanitarian project. They claim to have trialled 430,000 children before picking the most talented ones – and Onyekuru was one of them, having impressed enough to join Aspire from his small Lagos youth team in 2012.

The man responsible for unearthing Onyekuru's talents is Josep Colomer, a former director at La Masia who was directly involved in developing Leo Messi's talents. The fact that Colomer was recruited by the Qataris is hardly surprising, because they have good ties with Barcelona – including the famous shirt sponsorship. Xavi, who now plays in Qatar, is one of Aspire's global ambassadors, and is also named as an academy advisor.

In 2012, the Qataris decided to buy Eupen in order to enable academy graduates to get experience in a significant European league. Colomer is now Eupen's sporting director, while the coach – the magnificently named Jordi Condom – is also a Barcelona playing graduate who worked at La Masia for six years. This project is Catalan at heart, and Eupen tend to play possession football. Former Barcelona striker Jeffren Suarez, who scored in the famous 5-0 win over Real Madrid in 2010, is the most famous name in their squad.

The Aspire Zone Foundation's use of Eupen is not dissimilar to the way the ASEC Mimosas academy tried to use Beveren in the beginning of the 2000s. Jean-Marc Guillou, a close friend of Arsene Wenger, acquired the club back then so that his Ivorian youngsters would be able to play in Belgium – the most famous of them being Yaya Toure. Unlike ASEC Mimosas, though, Aspire are a multinational project, and academy graduates from Nigeria, Senegal, Mali, South Africa and Qatar have found their way to Eupen.

So far, Onyekuru has turned out to be the best of them by a huge distance, but the Qataris never need money and the player’s efforts to get transferred to Celtic in January were unsuccessful. Eupen refused to sell, and when the striker went AWOL in protest, they simply banished him to the reserve side.

Eventually, Onyekuru apologised and returned stronger than ever. Fans whistled him for a while, but his superb form forced them to change their minds and he became an idol once more.

In order to make peace with the youngster, Aspire promised to let him go in the summer, and the interest from Premier League clubs has been a blessing. Onyekuru had dreamt of playing for the Gunners and Thierry Henry has always been his idol, which is why he puts only his first name on the back of his shirt. But Everton could be a fine move for him, via a stint with a much bigger Belgian club in Anderlecht.

Onyekuru's style is actually quite similar to that of Henry. The Nigerian claims that centre-forward is his best position, but he’s frequently used on the left wing.

His dribbling skills are phenomenal, and he is especially good when running at defenders at full speed – it’s how he scored a breathtaking goal against Mouscron, leaving five opponents in his wake.

The self-confident Onyekuru is a cool finisher well beyond his age, and possesses a terrific shot with his right foot. The Aspire academy and Eupen cherish technical skills, and that’s why the Nigerian has made such phenomenal progress over the years. Football-wise, he is very well educated.

Onyekuru is still very inexperienced at a high level, is yet to make his international debut for Nigeria and can't be fully judged by his efforts against mediocre opposition in Belgium.

He tends to be a bit selfish, and his ball distribution leaves a lot to be desired. The 19-year-old’s left foot is much weaker, and his heading needs to improve significantly. His attitude could be a problem as well, as exemplified by his rather volatile attempts to force a transfer.

"Onyekuru is way too good for the Belgian league and deserves a big move," says Belgian journalist Sven Claes.

Onyekuru is so ambitious that he promised his mother that he’d score 25 goals in the 2016/17 season. Adding his two strikes in the Belgian Cup to the 23 league goals, the Nigerian was true to his word.