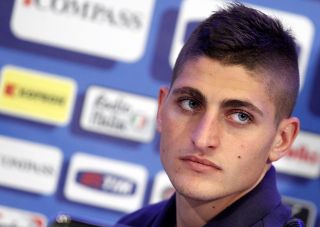 Five years ago, an earthquake devastated the Italian town of Aquila and the Abruzzo region. It hit 5.3 on the Richter scale and claimed the lives of 309 people, making it the deadliest to strike the country since the Iripina earthquake of 1980. Marco Verratti was in bed at the family home in Manoppello when everything around him began to shake in the early hours of that fateful April morning. “It was an awful feeling,” he recalled.

There had been what seismologists call foreshocks in the months beforehand. Many aftershocks would follow. The whole experience left Verratti traumatised. “We slept in the car for two weeks. I even stopped playing football.”

He was 16 at the time, still only a boy but no ordinary one. Unlike his fellow villagers, who used to make the half-hour drive to watch Pescara at the Stadio Adriatico every other Sunday, Verratti was already playing for their first team and had been doing so in Italy’s third division for almost nine months.

“He has always been what we call a predestinato,” Pescara’s academy director Antonio Di Battista explained, “a talent visible from a very young age.” Atalanta had wanted Verratti to join their famous youth setup a few years earlier. Inter had too. But for €5,000, he was Pescara’s. They threw in a few balls, but the deal breaker was 10 tickets to watch them play Juventus, who had been relegated to Serie B after the Calciopoli scandal. Verratti’s mother and brother are fans of the Old Lady. He was too. “[Alessandro] Del Piero was my idol as a kid. I had a poster of him in my room.”

Signing Verratti was one thing for Pescara. Keeping hold of him another, even at that age. Directors from AC Milan famously barged down the door to the away dressing room at Milanello with a contract drawn up ready to sign and a cheque for €300,000 made out to his club following a jaw-dropping display of his against their under-16s. They asked Verratti to stay the night and do a medical the next morning.

Given the chance, most kids would simply have asked: “Where do I sign?” Verratti didn’t. He burst into tears. He wanted to go home to Pescara; he wasn’t ready to leave his family and preferred Manoppello to Milanello. Watching him step back onto Pescara’s bus, the Milan officials must have let out loud sighs of regret. “Ah well, there he goes, the next Andrea Pirlo. We had his successor right under our noses. Damn.”

Pirlo is the player to whom Verratti has most been compared. Like Italy’s venerable playmaker, the youngster started out as a No.10 playing behind the strikers. That is, before one of his coaches had the intuition to instead use him in front of the defence as a deep-lying playmaker or regista, the director of his team’s play.

In Pirlo’s case it was Carlo Mazzone at Brescia, a change of position consolidated at Milan under Carlo Ancelotti. In Verratti’s, it was Eusebio Di Francesco, also a former Roma midfielder like Ancelotti, and Zdenek Zeman, a former Roma coach like Mazzone.

Credit to them for seeing it so early. Made a regular by Di Francesco upon Pescara’s promotion to Serie B, Verratti began to run the show for his team. With Zeman, it was box office. Pescara played the best football in Italy. They beat Vicenza 6-0 at home and Padova 6-0 away. They scored 90 goals and returned to the top flight for the first time in nearly two decades.

Over the course of that season at the Stadio Adriatico some of Italy’s most exciting youngsters came to light: Lorenzo Insigne, Ciro Immobile and of course Verratti himself, the Gufetto or Little Owl, nicknamed for his big eyes, all the better to see the play with. His head seemed to swivel like an owl’s, too, so good did his peripheral vision reveal itself to be.

Zeman wished to take Verratti with him to Roma. Napoli hoped he’d follow Insigne back to the San Paolo now that his loan was up. But Juventus, the club he supported as a boy, appeared to be in his destiny. Pirlo was now in Turin and, as he approached his mid-thirties, the club’s succession planning had Verratti top of the list as the heir apparent. What they hadn’t reckoned on was the interest of Paris Saint-Germain.

Since becoming the French club’s general manager a year earlier, Leonardo, the former Milan midfielder and director, displayed a liking for shopping in Italy. It was the market he knew best after all. Between his appointment in the summer of 2011 and his departure two years later, he spent £232 million there. No one could compete with PSG, and when Leo made a bid for Verratti, Juventus knew this was an auction they couldn’t win. They signed Paul Pogba for free instead.

Italy coach, Cesare Prandelli, who had called Verratti up to his preliminary squad ahead of Euro 2012, was disillusioned. “I find it scandalous that a player like Verratti who we have seen in Italy, who we know well, has ended up abroad, that we have let him go,” he lamented. “I repeat: scandalous.”

If the signing caused a stir in Italy, it didn’t in France. Unlike PSG’s other signings that summer – Zlatan  Ibrahimovic, Thiago Silva and Ezequiel Lavezzi – the young Italian was an unknown. “And who are you, Marco Verratti?” asked L’Équipe. He was not a ‘Galactique’. He’d never played in Serie A. He’d never played for Italy. How did he fit in with their strategy?

Well, shortly after the Qatar Sports Investment fund bought PSG, the president they appointed to run the club, Nasser al-Khelaïfi, explained it thus: “We are not trying to recruit Lionel Messi, but we want to invest in the greatest talents of tomorrow,” he said. “We want the new Messi.” And the new Pirlo [Verratti, now 21]. And the new Thiago Silva [Marquinhos, 19]. And the new Bixente Lizarazu [Lucas Digne, 20]. That’s how it has played out.

But let’s flash back to the day Verratti was unveiled underneath the Eiffel Tower. A crowd had gathered but they hadn’t come to see him, they were there for Ibra. Little and large. Intimidated Verratti most certainly wasn’t. Ibra would take him under his wing. An unforgiving type, who’ll scowl if you don’t give him the right pass, his respect has to be earned. Verratti soon had it. “Everyone knows how talented Marco is,” Ibra said. “He has extraordinary potential.”

Mature beyond his years on his debut away to Lille, he chipped Javier Pastore through for the opener on his first league appearance at the Parc des Princes and started the move for the winner in a 2-0 win against Toulouse. Substituted in the final 10 minutes he received a standing ovation.

Verratti’s reward was a Champions League debut at home to Dynamo Kyiv and there’s an iconic image from it of him leaping onto Ibra’s back after the Swede scored a penalty. He looked like Napoleon preparing to cross the Alps, his horse rearing up, in Jacques-Louis David’s famous painting. Verratti had conquered his teammates and the fans.

It helped that he had a coach like Ancelotti and several other Italian speakers in the dressing room to ease his adaptation. It helped that Ancelotti understood from his experience of Pirlo what kind of player Verratti is.

He kept the faith even when his protege sometimes frustrated by holding on to the ball too long on the edge of his area only to get rushed by an opponent and lose it in a dangerous position. You see ‘Marcolino’ likes to take risks. He enjoys the thrill of inviting pressure and then taking a series of players out of the game with a killer pass.

That attribute complements the powerful running of Blaise Matuidi and the organisation provided by Thiago Motta. PSG’s is one of Europe’s most balanced midfield trios, bettered only by Barcelona’s Xavi, Busquets and Andres Iniesta and Juventus’s Pirlo, Pogba and Arturo Vidal. It – and Ibra, in addition of course to the club’s spending power – was one of the principal reasons why they won the league for the first time in nearly two decades in Verratti’s first season.

At the end of it, he went to the Under-21 European Championship in Israel with Italy and pulled the strings as his country reached the final only to lose to Spain like the senior team had done a year earlier. There were reports that Ancelotti wanted to take Verratti with him to Real Madrid. A pay rise put an end to the speculation about his future, though it remains much gossiped about.

When new coach Laurent Blanc pushed PSG to sign Yohan Cabaye from Newcastle over the winter it created the impression that Verratti’s place in the side might be under threat. A feisty character, often in referees’ ears, protesting their decisions, he was getting too many cards for Blanc’s liking. So far though, Verratti has kept the France international out. He’s going nowhere.

Linked again with Juventus in the papers as a possible bargaining chip in PSG’s efforts to sign Pogba this summer, Verratti said: “When I was a kid, I loved them. But today I am happy here. PSG’s project figures among the best in the world. If I were to leave for Juventus now, I would be making a step back. In Paris we have the possibility to win everything in the next few years.”

Right now, his focus is on doing just that and going to the World Cup in Brazil. Unlikely to start, Verratti has said: “For me being an alternative to [Pirlo] isn’t a limitation but an honor, I include him among the best three midfielders in the world in that role.” Should the great man retire from international football after the tournament, Italy won’t have to worry about sourcing a replacement. They’ve found him already. The ‘little prince’ Marco Verratti will soon be king.