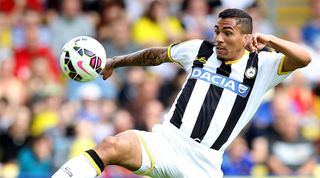 For a nation that has produced so many dazzlingly skilful attackers and flying wingers, there is something refreshing about a Brazilian ball-winner.

But from a young age, Allan has excelled in the role and can now claim to be one of Serie A’s top midfield marshals.

His journey began when he was signed to Vasco de Gama as a 17-year-old, where he impressed enough to earn a call-up to Brazil’s victorious Under-20 World Cup-winning side of 2011, a team which also featured the likes of Oscar, Willian and Philippe Coutinho.

His star was rising and the notoriously thorough Udinese scouting system was quick to snare him in a €3 million deal in summer 2012.

He proved one of the best bargains of the season, defying expectations to make 36 appearances as Francesco Guidolin’s side marched to a surprise Europa League place.

A more challenging second season followed as Udinese finished 13th and Guidolin departed, but under new coach Andrea Stramaccioni’s tutelage Allan has once again excelled, even scoring his first goals for the club as his rapid improvement continues.

Few South Americans have adjusted to Serie A as effortlessly as Allan. Udinese have a well-earned reputation for the quality of their extensive scouting network, which has unearthed the likes of Alexis Sanchez and Juan Cuadrado, and the deal that brought the Brazilian to Italy promises to be the chief scout's latest boast.

Allan is by no means in the destroyer mould of defensive midfield players. The influence of his home nation has not completely bypassed the 24-year-old, and his comfort on the ball and excellent dribbling ability are as central to his repertoire as his superb timing in the tackle and lung-busting work-rate.

Although the ability of a player should never be based on one game, his performance in Sunday’s goalless draw against champions Juventus earned him perhaps the most widespread recognition of his talent since he first arrived on the peninsula in 2012.

While goalless draws do tend to produce exaggerated appraisals of defensive players in the absence of a goalscorer or creator, Allan’s remit of shackling Paul Pogba was so brilliantly accomplished that he deserved every ounce of it.

Pogba has so often been the player to command the limelight, but it was his opposite number who took centre stage at the Stadio Friuli. Allan’s calm and controlled performance in the middle of the park got coach Stramaccioni flustered enough to suggest that he’s now one of the best midfielders in Europe – behind Pogba.

Comparing the two directly would be unfair given their completely different styles of play, but under Stramaccioni, Allan has started to contribute more in the attacking phase than in previous years. Two goals in 23 appearances may not sound particularly impressive, but when you consider that he had previously only managed one in his entire career, it is safe to suggest this part of his game is improving.

Now in his third season in Udine, Allan has become the linchpin of his team, dictating the tempo of their possession and effectively breaking up play off the ball. But with their good early-season form dwindling, the club may be forced to cash in on another South American discovery should a substantial offer arrive.

Superb work-rate and excellent tackling ability give Allan his reputation as an effective ball-winning midfielder. He has the ability to closely mark players of the highest calibre and come out on top, as shown in his duel with Pogba. On top of his excellent fitness and good turn of pace, he displays a footballing intelligence that sets him apart from more old-school midfield enforcers.

Allan is excellent with the ball at his feet, combining superb dribbling ability with a creative eye for a pass – he has contributed 11 assists for Udinese so far, a figure that will only rise. He serves as the pivot through which the Zebrette construct their attacks, and could be comfortable deployed deep or as a playmaker.

His short stature means Allan is not the most physically intimidating opponent, although that is what makes the timing of his tackles so impressive. Occasionally they haven’t been so well timed, and although he has only been sent off once in three years at the Stadio Friuli, the Brazilian has racked up 18 bookings.

The lack of goals isn’t necessarily a huge weakness depending on the role a midfielder is asked to perform. However, a central midfielder of any disposition would be expected to chip in, making the two Allan has netted this season an encouraging suggestion that this is an area the Brazilian is busy addressing.

“Buffon was decisive on two occasions, but I want to underline the excellent performance of Allan – who I feel is one of the best midfielders in Europe behind Pogba,” purred Udinese coach Stramaccioni on the 24-year-old, after his impressive display against Juventus.

Allan's first goal for Udinese came on December 3 in their 4-2 Coppa Italia win over Cesena (above). The last time he'd scored before that was in an 8-3 victory for Vasco de Gama against Club Aurora on October 26 2011 – a goalscoring drought of 1135 days.

Unfortunately for Udinese fans, the inevitable. The Zebrette have always succeeded in buying low and selling high, and they are likely to employ the same tactic with Allan. Under Stramaccioni, Udinese started the season brightly and ignited hopes of a European push, but since then form has stuttered and they have slid to 12th place.

A player of Allan’s age and ability will be sought after by Europe’s elite, with Juventus the likely front-runners given their power in the Italian market. However, dynamic and technically-gifted ball-winning midfielders are at a premium in the current market and it wouldn't be difficult to name a host of Premier League clubs who could be tempted to bid for his signature at the end of the season.