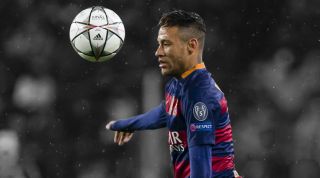 In football, there are essentially only three possibilities when the ball comes your way: dribble, pass or shoot. Keep the ball yourself, feed it to a team-mate, or aim for goal. There are a million possibilities in terms of precisely how you do these three things, of course, but it’s essentially a simple choice.

Nevertheless, there are very few footballers who can legitimately claim to be world-class at all three aspects. Even some of the greatest players excel at only two: Cristiano Ronaldo has been a majestic dribbler and a lethal finisher, but not a particularly penetrative passer. Mesut Ozil can dribble and pass with the best, but is unconvincing in front of goal. Thomas Muller can pass and shoot expertly, but he’s unlikely to beat three opponents with a mazy dribble.

Barcelona, though, are now able to count upon two players who excel in all three. The first is Leo Messi, who has been superb at all three for the past half-decade at least. But now there’s another: Neymar. Not quite on Messi’s level, he’s nevertheless dangerous in all three ways.

Messi developed in stages. He was initially so dangerous because he was a mesmeric dribbler from the right, the quality that caught the eye when he made his breakthrough in 2005. Naturally, he wasn’t fully formed at that stage, and only became truly prolific goalscorer for Barça under Pep Guardiola in 2008/09, when he hit 38 goals – smashing his previous best of 17.  He’s never hit fewer than 40 since.

But Messi’s game developed even further in 2010/11, when fielded permanently as a false nine, almost at the tip of a midfield diamond. Then, with constant runs from David Villa and Pedro ahead of him, his through-balls became increasingly dangerous. He managed 18 league assists, a significant jump from the 10 and 11 he’d managed in his previous league seasons.

Messi, therefore, was an expert dribbler at roughly 18, an expert goalscorer at 22, and an expert passer at the age of 24. Neymar, impressively, is managing to match his record stride for stride.

Neymar, similarly, first caught the eye with Santos for his glorious dribbling. In a country often famed for its beautiful football but equally keen on defenders crunching showboating attackers, Neymar’s ability to beat opponents made him a perfect wide forward, usually starting on the left and drifting inside. Experiments with him as a proper centre-forward or a No.10 were inconsistent early in his career: Neymar needed wide open spaces to show his quality.

In his first season at Barcelona in 2013/14, Neymar showed promise and talent rather than an end product. Nine goals and eight assists was a decent record but not yet world class, particularly given that chances are relatively easy to come by at Barcelona.

Last season, there was a dramatic improvement in terms of his goals in La Liga: after nine the season before, Neymar hit 22 in 2014/15. His assist figures actually dropped slightly, however: from eight the previous season to seven. In the Champions League, meanwhile, he hit 10 goals – which made him the joint-top scorer alongside Ronaldo and Messi – but managed no assists.

This term, Neymar has become a much better passer. As well as being on course to beat last season's goal return, he’s already smashed his previous assist tally, which currently stands at 10 for the season in La Liga.

More intriguingly, other statistics concerning passing have improved massively. In the league he’s creating 3.2 chances per game, which compares favourably to 1.8 last season and 2.2 in 2013/14. Perhaps most notably, he’s now hitting 1.8 accurate long balls per game, compared to 1.3 last season and 0.4 in his first season – a sign he’s become more expansive with his passing.

Neymar opened the scoring against Arsenal on Wednesday night, but more impressive was his distribution. In general, he collected the ball from Jordi Alba in inside-left positions and then looked to fire the ball into Messi's feet. He found the Argentine 21 times: amazingly, more than twice as often as any other Barcelona team-mate.

The most impressive aspect of Neymar’s passing is the precision he manages in tight situations on the edge of the box. He only conceded possession seven times despite generally attempting ambitious passes, evidenced by the fact he created more chances than any other player on the pitch. The way he fires balls into the feet of team-mates seems to catch opponents by surprise.

Meanwhile, he dribbled past more opponents than any other Barça player, and all three of his shots were on target, including the opening goal.

Why La Liga is once again proving why boring is best

It seems like Neymar has replicated Messi’s development closely: a great dribbler at 18, a prolific goalscorer from the first half of last season, when he was 22, and now a top-class passer having turned 24 last month. Now, Barcelona have the world’s best two attackers.