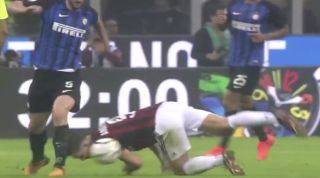 The Milan derby has historically been a fiery affair, and Sunday's clash between the two city giants was no different as they played out a hugely entertaining contest that ended 3-2 to the Nerazzurri courtesy of a Mauro Icardi hat-trick.

The match produced seven yellow cards, with five of those dished out to Inter players.

Yet somehow, Milan's Silva didn't go into referee Paolo Tagliavento's book when he dived into a head-first foul on Roberto Gagliardini, as Inter looked to counter in the 77th minute.

Silva's bravery was in vain, however, as Inter's victory ensured they keep the gap behind Serie A leaders Napoli to two points.