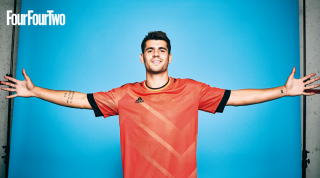 Not since the days of Jimmy Floyd Hasselbaink, who blasted 70 goals in 136 Premier League games from 2000-04, has the shirt’s wearer found the net with any regularity.

Mateja Kezman, Khalid Boulahrouz, Steve Sidwell, Franco Di Santo and Fernando Torres all struggled to shine at Stamford Bridge, while Radamel Falcao netted just one goal in 10 league appearances during an injury-hit 2015/16 on loan from Monaco.

But in Morata, the Blues have finally found a striker to break the spell. After missing his penalty in the Community Shield shootout defeat to Arsenal, the 25-year-old hit seven goals in his next seven appearances, including a hat-trick against Stoke.

The former Real Madrid and Juventus hitman might have been sporting a different number if some of his Chelsea team-mates had got their way, however.

“That was one of the first things I was told after turning up here," Morata told FFT in our December 2017 issue, out now. "Even the lads were begging me not to take that shirt because it was cursed, but I wanted it.

“I’ve done a couple of little things to avoid the bad luck that the shirt supposedly brings. Can I tell you what I’ve done? No chance. If I did that, the curse will come back!”

READ THIS NEXT Morata: "It was my destiny to play for Conte. I'm so happy to be here"

Read the full interview with Alvaro Morata in the December 2017 issue of FourFourTwo magazine – a strikers special in which we also interview Gabriel Jesus and count down the 30 greatest Premier League forwards ever. Also this month, we meet the father and son working wonders at Harrogate Town, go One-on-One with Dani Alves, find out if 3G pitches are the future of the Football League, and hear about the turmoil Tony Adams went through before, during and after Euro 96. Order a copy now, and then subscribe!