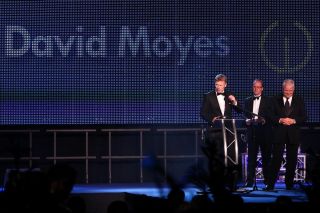 Embattled boss David Moyes has been boosted by the news that he is Manchester United Manager of the Month for December.

Moyes took on the unenviable task of succeeding Sir Alex Ferguson and has found it tough to step out of Fergie’s metaphorical shadow, and also his literal shadow cast from the directors box, which ensures United’s bench is in a constant state of eerie darkness and is plagued by bats.

While January has been miserable for Moyes, with defeats against Sunderland, Swansea and Tottenham and a painful bite from a soprano pipistrelle, an award for his efforts in December has lifted his spirits.

Moyes was officially announced as Manchester United’s Manager of the Month for December 2013 in a post on the club’s website this afternoon.

“The award is deserved recognition for David who we felt did the most management of anyone at the club during December.

“If anyone manages Manchester United at the moment it is David Moyes.”

While the news is a timely boost for Moyes, he still has a long way to go if he is to emulate Sir Alex Ferguson’s 322 consecutive Manchester United Manager of the Month awards, up to August 2013.

“It’s nice to be off the mark,” Moyes admitted to FourFourTwo.

“I felt I make a strong case in September but in fairness Stevie [Round] really deserved it and in October personally I was delighted to see it go to Gavin [McManus – who manages the car park at Old Trafford].”

American rock band MGMT won the award for November, and many felt 2008 Jennifer Aniston romantic comedy Management would triumph in December, after vice-chairman Ed Woodward rented it through LoveFilm, but Moyes prevailed.

“I’ll certainly cherish this award, but the real satisfaction comes in knowing this star-studded squad with a recent history of complete domination was able to beat Aston Villa, West Ham, Hull and Norwich.

Moyes may struggle to replicate his success next month, with United on poor form and a certain light-hearted tale of a travelling art saleswoman (Aniston) fending off the affections of a flaky motel owner (Steve Zahn) sitting on Woodward’s coffee table.