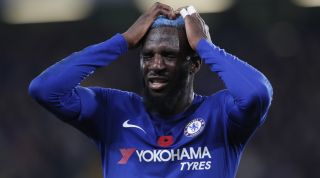 After a difficult time in Italy with Torino in 2016/17, Hart was hoping to resurrect his career with the Hammers, on loan from Manchester City once more.

But just four months later (and 33 goals conceded in 14 games), the goalkeeper had been dropped in favour of Adrian – and now the former England No.1 isn’t even guaranteed a place in the summer’s World Cup squad.

Hart, whose City colleagues romped to the title without him, only turned 31 in April.

If Pep Guardiola decides a player is no longer good enough, you canassume there's a very good reason why. Zabaleta is legitimately considered one of the best right-backs of the Premier League era with two titles to his name, but the now-33-year-old veteran seems too off the pace to compete in England's top flight these days.

The Argentine has played a significant part in the division's joint-worst defence this season; only relegated Stoke have conceded as many as West Ham’s 67. A two-year contract worth a reported £90k per week still seems like poor value.

On the back of his brilliant campaign of 2016/17, the Toffees had to pay £25m (rising to £30m if conditions are met) to land Keane from Turf Moor. Yet while the 25-year-old’s form has stuttered for the Merseysiders, Everton have conceded 18 more league goals than the centre-back's former side Burnley.

Meanwhile, Keane's replacement for the Clarets, James Tarkowski, has taken his place in Gareth Southgate's England squad after a stellar season.

While Davinson Sanchez has flourished at Tottenham, his former Ajax team-mate (from a side that reached the 2017 Europa League Final) fast became the on-field personification of Frank de Boer's torrid managerial reign at Selhurst Park.

Having started the opening-day 3-0 home defeat to newly promoted Huddersfield, Riedewald was dropped and only returned from the bench three matches later for De Boer's final game in charge. Since being shifted to defensive midfield, the 21-year-old has managed just three more Premier League starts under the Dutchman's successor, Roy Hodgson.

Not to pick on the east Londoners, but West Ham have made some awful defensive signings this season.

Having been banned from European competitions until June 2018 by UEFA for kicking a supporter during a Europa League match with Vitoria de Guimaraes, Evra was subsequently sacked by Marseille. However, West Ham decided to sign the now-36-year-old Frenchman in February – just weeks after co-owner David Sullivan had declared that the Hammers' next arrivals "won’t be old journeymen, they will be young players. They won’t be 32." (He wasn't wrong about that last bit, in fairness.)

Evra says he wants to play until he's 40. Hammers fans will be hoping that happens far away from the London Stadium.

Poor Renato Sanches, the latest player to fall foul of being named a wonderkid. In the summer of 2016, off the back of helping Portugal win the European Championship aged 18, Bayern Munich paid Benfica an initial €35m for the teenager (which could rise to €80m depending on add-ons).

After a difficult first year in Germany, Sanches was loaned to Swansea in a bid to help the midfielder rediscover his form. At the time it felt like an incredible coup for Paul Clement, the Swans manager at the start of the season who previously assisted Carlo Ancelotti at the Allianz Arena, Real Madrid and PSG.

If the deal was designed to help the young player regain his confidence, though, it has massively backfired. Amid injury and poor form, Sanches has managed only 12 league appearances in a spell that is best remembered for the 20-year-old passing the ball to an advertising hoarding during a 1-0 defeat at Chelsea.

Monaco's surprise Ligue 1 triumph and run to the Champions League semi-finals made their players hot property in the summer of 2017. Kylian Mbappe went to PSG, Manchester City snapped up both Benjamin Mendy and Bernardo Silva, while Chelsea paid £40m for Bakayoko.

In fairness, the French midfielder had been key in the Principality club's success – indeed, he scored the Champions League last-16 goal that downed Manchester City – but at Stamford Bridge he has looked equally uncomfortable defending and attacking this season. At least a good showing in the Blues’ 1-0 win over Liverpool hints at better things to come next season.

Another member of that successful crop from Ajax – the captain, no less – Klaassen cost Everton £23.6m last summer. The 25-year-old has played just six league games since and is rarely even included in the matchday squad, with manager Sam Allardyce revealing his frustration at failing to send the midfielder out on loan during the January transfer window.

The man who signed the Netherlands international, Allardyce's predecessor Ronald Koeman, has since admitted that it may have been the wrong decision. "I was disappointed with Davy," Koeman told Dutch TV channel Ziggo Sport. "In retrospect, you may have to doubt whether the step was not too big."

Another member of the group that brought so much success to Monaco in 2016/17, Carrillo was snapped up by the goal-shy Saints for £19m in January.

The Argentine has since failed to score in his seven appearances for the relegation-haunted south coast side, and he's only played seven minutes of football from the bench since Mark Hughes arrived. Carrillo has been dropped entirely from Southampton's matchday squad for their last five matches.

Having scored 11 goals in 29 league games, it may seem harsh to include Morata in this XI. But when comparing expectations to reality after the west Londoners paid a club-record £60m for the Spaniard, the striker's inclusion feels justified.

After a decent start, Morata has netted just once in 11 league games since December 30 (although he did grab FA Cup quarter- and semi-final goals against Leicester and Southampton). Morata's struggles were best epitomised by golden miss opportunities during January's 2-2 draw with Arsenal, and a hideous recent miss against Burnley at Stamford Bridge.

"His first touch wasn't that great, he wasn't holding the ball well," goalscoring master Thierry Henry said after the Gunners game. "You can see a striker not being great when he takes too many touches to put the ball down."

The 7 most nail-biting final-day deciders between direct rivals

Revealed! How the Premier League table should REALLY look this season

Leicester fans were largely satisfied with the arrival of a young, hungry upstart to rival Jamie Vardy up front – but it's hard to make a case for Iheanacho's signing being anything other than disastrous so far.

The 21-year-old Nigerian, a £25 million arrival from Premier League rivals Manchester City, has managed only five Premier League starts for the Foxes and scored just once in his 19 league appearances. Five goals in seven cup outings bulk up his tally, but the striker has done little to suggest he can rival or support Vardy longer-term, and looks ill-suited to Leicester's style of play.

A good World Cup could reignite his career – but whether that's at Leicester or not remains to be seen.