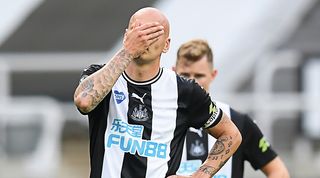 I’ve come to realise over the past 30 years that expecting nice things as a Newcastle fan is foolish – but this summer, the gut-punch felt completely different. This time, it really, really hurt.

This time, we got within one signature of a new era for Newcastle. The change that has been so needed at St James’ Park – the end to owner Mike Ashley’s 13-year reign of mediocrity, occasional flirtation with the Championship and fireplace vomiting – was within touching distance.

Instead, geopolitics and the piracy of broadcasting rights in Saudi Arabia – rather than the abuse of human rights – proved to be the sticking point.

On July 30, the Saudi-backed consortium walked away from their £300 million deal, having grown tired of waiting for an answer from the Premier League’s owners’ and directors’ test. So much hope, so much expectation... all gone. It’s all so very Newcastle.

In six weeks, we went from tongue-in-cheek images of Kylian Mbappe in black and white to wondering if sovereign wealth fund PIF’s £17m, non-refundable deposit might be used to buy a new player. Please, Mike, can we have some more?

The new Premier League season looms and Newcastle supporters must very quickly get used to the idea that this is it. This is the best we can hope for in these circumstances, and Amanda Staveley isn’t about to sweep in on a unicorn and take us away from all of this drudgery.

There will be no new brave new world of Champions League nights, champagne, caviar and glory... not yet, anyway. Steve Bruce really does have his work cut out if he’s going to have a functioning squad ready for the start of the campaign.

FEATURE Revealed! Which teams have the easiest – and hardest – starts to the 2020/21 Premier League season?

With holes all over the first team due to contracts expiring (Matty Longstaff) and loans ending (Jetro Willems, Danny Rose, Nabil Bentaleb and Valentino Lazaro), Newcastle will need to be canny when it comes to the transfer market. The arrival of Ryan Fraser, Callum Wilson and Jeff Hendrick represents a promising start, but more is needed.

A second consecutive 13th-place finish was another minor miracle for the Magpies last term, not least as xG and xGA data implied they were the league’s worst team.

You wonder how much longer they can keep this up.