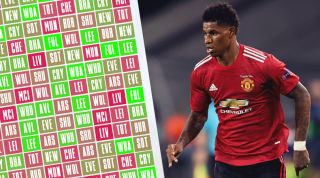 Here we go: Premier League fixtures for the 2020/21 season have been released.

Weird, right? It feels like only yesterday that we wrapping up the 2019/20 season – and it wasn't far off, really.

The Champions League and Europa League are still going on, many pre-season tours have been cancelled and the Premier League only ended last month. But come September 12, we dust ourselves down and start all over again.

Given that every side in the league will want to get off to a quick start and gain some momentum in the early weeks of the campaign, that prompted us to wonder... who's got the easiest games when?

We arranged last season's Premier League table from top to bottom – the promoted sides were given 18th, 19th and 20th place according to where they finished in the Championship. Then we assigned them a colour from green to red.

The redder the colour, the more difficult the fixture should be – in theory, at least. That makes Liverpool the most difficult game for anyone, followed by Manchester City; then we have Fulham as the easiest – sorry, lads – given that they were play-off winners.

Of course, it doesn't always work out that way. But here's what we found.

Those early weeks of the season are key – but by our reckoning, there are some pretty difficult starts for a number of sides.

Sheffield United are hoping to avoid second season syndrome this term, but that run of playing Liverpool, Manchester City and Chelsea in a row looks like a tough one. Add in fixtures against Arsenal and Wolves, and Chris Wilder may well be adjusting expectations for the beginning of the campaign.

Arsenal, meanwhile, have two relatively favourable fixtures before plunging into the deep end, playing Sheffield United, and four of last season's top five, in their following five games. Mikel Arteta will be hoping that end-of-season spark against City, Liverpool and Chelsea in July can be carried into this term.

West Ham United and Newcastle United don't have enviable starts either; Liverpool facing last season's Championship winners Leeds United, followed by Chelsea and Arsenal, is a baptism of fire, too.

Fulham had a torrid time last time they were in the top flight but these early fixtures give the Cottagers every chance of gaining a bit of pace in the early weeks of the campaign. They've got Arsenal at home to begin with, but getting Leeds, Aston Villa, Crystal Palace, West Bromwich Albion and West Ham gives them a chance to potentially rack up 15 points before November, if they're lucky. That's nearly halfway towards survival.

Wolves, too, have a sunny start, with a run of five fixtures that includes West Ham, Fulham, Leeds, Newcastle United and Palace. That could be key for confidence before facing Leicester City, Southampton and Arsenal - all potential rivals for European spots.

Manchester United have a fair opening three fixtures to ease them back into domestic football, but with Tottenham Hotspur, Chelsea and Arsenal not long after that, they could do with building momentum quickly.

As ever though, the Premier League isn't played on paper. Early season form will no doubt take twists and turns. It's the unpredictability that makes this division so wonderful, after all.

If you want to see how the full season will turn out, the good people at PA have put together this guide – but we warn you, everyone plays everyone else twice. We checked.