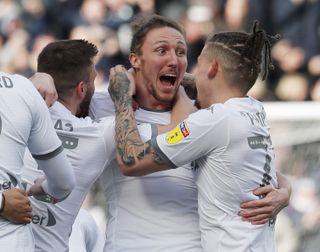 NEED A NAME? Fantasy Premier League team names: 100 excellent (and awful) ideas for yours this season

John Lundstram, Timo Pukki and Dean Henderson have gone into Fantasy Football folklore for their performances for promoted clubs last season. Promoted players usually cost much less than established Premier League stars and, in the early weeks before everybody else catches on, can be a secret weapon, firing you to the top of the league alongside your expensive signings.

Here are the best ones to look out for this season.

No team kept more clean sheets in the Championship last season than Leeds United and no promoted goalkeeper kept more clean sheets than Kiko Casilla’s 15. The Spaniard was in fantastic form in the 19/20 campaign as the Whites finally won promotion back to the Premier League after a 16 year absence. At just £4.5m, Casilla could save you £1.5m compared to the pricier shot-stoppers in the game.

The 32-year old boasted a 71% save ratio, meaning he’s likely to bag plenty of points for saves and, with Marcelo Biesla’s draconian training methods meaning Leeds are one of the fittest teams in the country, Casilla should be well protected by those in front of him. A good choice for the first half of the season before the traditional Leeds meltdown thereafter.

FPL Tips Which players’ post-lockdown form could continue in 2020/21?

As ever, the big man runs the risk of a few yellow and red cards - especially with VAR now firmly in operation in England’s top league - but with risk comes great reward.

Few strikers in the country have been as prolific as the Serbian international since he signed for Fulham, initially on loan, in January 2018. Mitrovic has plundered (he always plunders) 49 goals in 100 appearances for Fulham, and is also one of the few promoted players with a proven Premier League track record, having already scored 21 career goals in 77 top tier appearances.

The Championship’s top scorer last season with 26 goals, £6.0m could prove a bargain if Fulham get off to a good start. Arsenal at home in the first fixture of the season seems like exactly the sort of game he’ll thrive in.

West Brom’s Brazilian winger was arguably the standout player in the Championship last season. The 24-year-old recorded 20 assists and scored eight goals in 42 appearances in his debut season in England.

Initially on loan from Sporting Lisbon, Pereira’s move has been made permanent after a stunning campaign which saw him help the Baggies to automatic promotion, and it’s likely he’ll take on a starring role again in the Premier League. At just £6.0m, he’s worth a gamble in the opening stages before others take notice.

Yes, we all remember what Fulham were like last time they were in the Premier League - defenders were a bad idea. Things have changed since then, however, with the West London club aiming to bring in smart acquisitions instead of the major reconstruction which was their downfall last time.

One new face is former Wigan Athletic left-back Antonee Robinson. The American was one of the standout performers for the relegated Latics last season, and is so highly regarded, he almost joined AC Milan for £6.5m in January. Quick, good on the ball and a great crosser, Robinson could provide plenty of ammunition for Fulham target man Aleksandar Mitrovic. Managed just one assist last season, but should up his numbers in a more attacking side.

West Brom’s Nigerian centre-back scored five goals in the league last season and was a crucial member of the second division’s third best defensive unit. As a trusted ever-present in Bilic’s back four, Ajayi is guaranteed plenty of appearance points and will nick the odd goal.

With the more expensive defenders in the game costing as much as £7.5m this season (TAA, who else?), those that can score points without costing an arm and a leg could help your team surprise a few of your rivals in the early stages of the season. West Brom have a fairly kind start to the season, and don’t play a top four side away from home until a trip to Old Trafford on gameweek nine. Ajayi’s well worth a punt until then.

Leeds United right-back Luke Ayling was another of his team’s star performers last season, scoring four league goals and setting up five as part of the Championship’s tightest defence.

Translated into FPL points, those numbers would be huge, with defenders richly rewarded for their goalscoring feats. Of course, goals will be harder to come by at the top level, but with many tipping Leeds for a strong mid-table finish under Bielsa, there’s reason to believe Ayling can enjoy another stellar campaign at the top level. A cheap option at the back which might prove a masterstroke.

RONALDO AT INTER MILAN The UEFA Cup, the goals and the injuries – the full story of his time in Italy