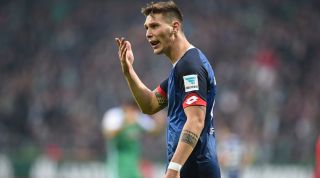 It's easier to count the top Premier League clubs who weren't interested in signing Niklas Sule this summer than those who tried to acquire him. Liverpool have followed his progress very closely in the last couple of years, while Chelsea reportedly made an official offer of €30m and Arsenal and Tottenham were also keen.

The towering 21-year-old German centre-back had other plans, however: he rejected all possible moves and chose to stay at Hoffenheim, where his position in the starting line-up was guaranteed.

The calm and intelligent youngster keeps his feet firmly on the ground, explaining: "Familiar environment is very important for my development". Eventually, Antonio Conte had to bring David Luiz back to Stamford Bridge instead - not exactly his favoured option.

Sule knows exactly what he's doing. Thanks to Hoffenheim, the stopper became an integral part of the German Under-23 team that won silver at the Olympics in Rio de Janeiro this summer. He then made his debut for the senior national team in August, while his club have started the season in emphatic fashion, unbeaten in their first nine games and currently residing in third place in the standings.

One key reason why Sule's so fond of life at Hoffenheim is the fact that his relationship with coach Julian Nagelsmann goes way back. Both men joined the club in 2010 - Sule a 15-year-old prodigy, Nagelsmann a 23-year-old youth coach - and worked together in the Under-17s, where Sule was the brightest prospect by some distance. He was soon invited to train with the first team by then-manager Holger Stanislawski, but Nagelsmann wouldn't forget the impression he made.

In 2012, Sule was the star of the German Under-17 side that kept four clean sheets en route to the final of the European Championship, where they were defeated on penalties by the Netherlands (yes, you read that correctly).

He then made his Bundesliga debut four months before turning 18, and cemented his place in the starting XI during the 2013/14 campaign under coach Markus Gisdol. Sule's rise was halted when he damaged ligaments in his left knee in the first few months of 2015, but he maintained his confidence - helped in part by a personal message from role model Jerome Boateng - and came back stronger than ever.

Sule was virtually ever-present for Hoffenheim last term, with his form dramatically improving when Nagelsmann was promoted to the role of first-team manager ahead of schedule in February. Some even suggested that he should have been included in Joachim Low's 23-man group for Euro 2016, but that would probably have been premature; instead, Sule was imperious at the Olympics, particularly in meetings with Portugal, Nigeria and Brazil in the knockout stage.

It's hardly surprising, then, that major clubs from across Europe are interested in the centre-back. Chelsea, Liverpool, Tottenham and Arsenal weren't the only ones in the queue to obtain his signature: Milan, Napoli, Inter, Borussia Dortmund, Bayer Leverkusen and Wolfsburg were all interested, too, but Sule decided that - for now at least - the grass isn't always greener.

Sule's as close to the perfect centre-back as you can imagine. Physically strong – he's well-built and stands at 6ft 5in – the 21-year-old's extremely good in the air, but also possesses outstanding technical skills on the ground. His passing range is excellent, and he can regularly be found starting off Hoffenheim's attacks.

When playing for the youth teams, Sule was guilty of making reckless tackles and giving away free-kicks in dangerous areas. He was cautioned three times at the Under-17 European Championship, but he's become a lot more composed since making the breakthrough into the senior squad. Sule's only been booked on seven occasions in 83 Bundesliga matches, while his immense reading of the game saw him commit just 15 fouls in the entire 2015/16 campaign.

His temperament's outstanding, moreover, and he plays with a maturity that belies his tender years. Improving all the time, Sule could go on to become one of the world's leading centre-halves.

While Sule's not slow, he can sometimes be outdone by mobile forwards. His weaker left foot could also do with some work; being able to pass long and short on both sides would give him the edge over many of his contemporaries.

"Niklas has matured very fast, both football-wise and personally," said agent Karlheinz Forster, a centre-back who won 81 caps for West Germany in the 1970s and 1980s. "He has a great chance to become a national team player."

Sule started out as a striker, and was only moved into defence after joining Hoffenheim. That's probably why he's still so dangerous when pushing forward and joining the attack: during his debut season in the Bundesliga, he found the net against both Bayern Munich and Borussia Dortmund.

Sule has the talent to become a world-class star, but it's important that he chooses the right time to leave Hoffenheim - going too early or too late could scupper his chances of fulfilling his potential. There are dozens of clubs who would love to benefit from his services, but the presence of fellow German Jurgen Klopp in the dugout perhaps makes Liverpool favourites to be his next employers.