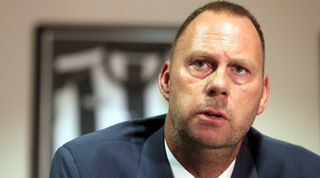 Notts County’s new reality in non-league is featured in the new issue of FourFourTwo magazine – and former owner Alan Hardy has admitted that the club became a ‘toxic environment’ during their slide to relegation from the Football League.

Hardy took over the club in 2017 but became a controversial figure with Magpies fans, as the world’s oldest professional football club were relegated from the Football League for the first time in their history in May.

The businessman quit Twitter earlier this year after accidentally posting an intimate picture of himself on the social media platform, and oversaw three managers in a season as Harry Kewell and Neal Ardley were unable to turn things around, following a poor start to last term under Kevin Nolan – the man who’d guided them to the play-offs in the previous campaign.

The club are now having to adapt to life in the National League. Hardy sold Notts County to Danish brothers Alexander and Christoffer Reedtz a week before the new season, admitting that his relationship with a section of Magpies fans had broken down.

A full feature on the club’s decline is in this month’s FourFourTwo magazine, on sale now, as Hardy has his say on events during his troubled time in charge at Meadow Lane...

IN THE MAG Tottenham and the trail for trophies; plus Ronaldo at Inter, Wilder, Rice, Gravesen and more!

How do you look back on your time at the club?

Very much a mixed bag of amazing highs and incredible lows. An emotional and psychological rollercoaster. It wasn’t the outcome we all worked so hard for, but despite relegation, the club now has some solid foundations to build upon in comparison to the chaotic conditions and processes we faced upon arrival. Saving it was my main aim, and we achieved that.

How was your relationship with the fans?

Again, very mixed. Supporters of other clubs like Forest and Derby are so much more reflective of the successes and changes made to the club, whereas others are understandably upset. We all wanted to be in a different place to where the club is now. I always backed my managers 100 per cent to make their own decisions with regards to players and transfers, so it was frustrating for me too.

What made you buy Notts County?

Thomas Gravesen on his shock move to Real Madrid

County was my passion since I was a kid, so who wouldn’t want to at least try to save it from the mess we found at the beginning? Saving the club was the only initial driver. It was days, hours and then minutes away from extinction; not administration, but being wound up. I was faced with a decision to either watch the club disappear forever or try my best to keep it working as a whole.

“These aren’t the issues you want to trouble the fans with: you’re trying to keep the club relevant, open and feeding into the enthusiasm of families and long-term supporters. My main aim was to take the club away from that precipice to give everybody options, going forward.

Were you prepared for the realities of club ownership?

I’ll be honest and say, even with a decent amount of business experience behind me, it was a very steep learning curve. It happened very quickly, literally in four days from December 19 to Christmas, with the lawyers and accountants working over the holiday to complete the due diligence process. Arriving new into the club in January 2017, without a business plan or model to follow, was enormously challenging. Despite running multiple businesses, I was incredibly exposed and unprepared for what lay ahead.

At a lower-league club, how do you achieve success and still balance the books?

Unless you’re incredibly skilled in developing and selling talent to make the club self-sufficient, I don’t believe it’s possible to run an EFL club without having a philanthropic owner propping it up financially. To a degree, I saw that as my role – to put something back into a club that I truly loved. Our attendances, sponsorship and pre-match dining was off the scale, but we still struggled massively to balance the books.

What would you have done differently?

Control the finances more rigorously, without a doubt. I got seduced by the industry and chased success. I would appoint a ‘transfer panel’, and be scientific and strategic in recruitment. Then appoint a head coach responsible for player motivation, training, tactics, formation and team selection – much like Spurs and top Premier League teams operate. Allowing a manager to bring in players at a whim was perhaps a mistake on my part.

When appointing managers, should you have gone for Football League specialists rather than up-and-coming big names?

I don’t regret appointing Kevin Nolan in the slightest. He did a fantastic job when we entered the club together. Remember they were bottom of the league and on a club record run of 10 straight consecutive defeats. The missing piece was an experienced director of football to work alongside him. Darren Fletcher sort of stepped into that role as vice chairman, but for lots of reasons it wasn’t successful. I do regret not giving Kevin more time, and that was down to pure inexperience of football club management and influence from others.

In hindsight, how big a turning point was the souring of the loan ‘agreement’ the club had with Nottingham Forest?

I don’t believe it had any impact. That’s not to say I wouldn’t have handled it differently now of course, but the only player we would have liked would have been Tyler Walker and we weren’t prepared to pay 100 per cent of his wages at £5,000 a week – double any other player at the club.

Did owning the club cost you money?

Yes, but a splash in the ocean in the grand scheme of things. Getting relegated wiped millions off the value of the club.

What impact did you think being so open with the media and engaging with the fans on Twitter have?

I’m an open person, so I always try to find the time to engage with anyone, particularly if they’re a fan. When we were doing well, it was great. When not, it was awful. I wasn’t prepared for the huge cynicism and vitriol of some, but I also understand how passionate people are about their team.

I’d go as far as to say that it’s changed my outlook on people and life. When I was running my business in the pre-Notts County days, the whole team of a sizeable company were united in its direction of travel and energy. Whenever we hit problems or issues, that energy and support actually intensified from everyone around us. That isn’t the case with football.

As with my predecessors at Notts County, a very small minority managed to create a toxic environment in times of need. There’s an interesting comparison with Liverpool or Manchester United who didn’t have that toxicity prevalent in their lean years. It always amazed me. We all wanted to achieve the same end result.

Now buy the magazine and subscribe to get 5 issues for £5!