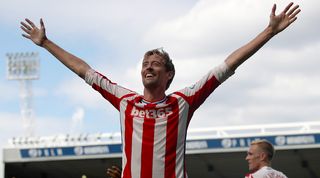 With his lanky frame and genial good humour, Peter Crouch always seemed destined for a place in the Guinness World Records. We hoped that might be because he could hold his breath underwater for 11 minutes or because he’d travelled around the world in a bathtub full of baked beans.

However – while there’s still time for him to achieve both of those feats (if they get a big enough bath) - this is for the more regular record of most headed goals in the Premier League (51, streaking ahead of Alan Shearer’s 46).

“It feels good," Crouchy opined. "To hold any record, certainly in the Premier League, is great. I’m very proud of it," added the Stoke hitman, who also admitted he wasn’t sure about the modern striker’s tendency to drop deep.

“I see centre-forwards hanging around outside the box and it blows my mind, I just can’t get my head around it. I believe, if you are a centre-forward, you should be in the box, ready for the ball.”

Joining Crouch in the Guinness World Records 2018 are Christain Benteke (fastest goal in a World Cup qualifier, thanks to his 8.1 second effort against Gibraltar this year); Cristiano Ronaldo (for scoring in four different European Championship tournaments) and Jogi Low (most wins by a manager with the same international team).

Even Shearer, surpassed in the heading stakes, retains a place due to the unusual fact that he apparently has the most selfies taken in three minutes (134). We’ll assume other people were also involved in the challenge – if it was just 134 pictures of Big Al staring sternly into his Nokia, it’s vaguely terrifying.