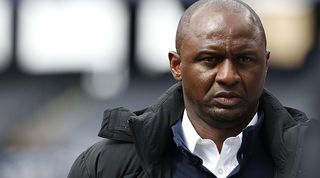 It’s easy, even if simplistic, to compare the management styles of Patrick Vieira and Arsene Wenger.

Vieira, who captained Wenger’s Arsenal side through its 2003/04 Invincibles season, evokes the same sort of composed, sometimes stoic, air as Wenger. Each knows what he wants to accomplish, and – to borrow the cliché of modern football – is committed to the process. Just as he did in his playing days, Vieira quietly has a commanding presence.

“He’s very calculated in what he says and how the message comes across,” New York City FC midfielder Tommy McNamara has said of his coach. “He uses as few words as possible to get his point to us easily and understandable. He’s very calm, cool and collective in delivering his messages.”

Wenger is finally stepping down as Arsenal manager at the end of the season, after nearly 22 years with the club. All three of his Premier League titles came during Vieira’s time in London from 1996-2005, and now the former captain is among the rumoured candidates to take over – just don’t tell him that. Speaking at the unveiling of NYCFC’s new training facility on Tuesday, Vieira said he hasn’t heard from Arsenal.

“About what?” the Frenchman said with a smile, drawing laughter from a small group of reporters.

Vieira’s potential candidacy should intrigue Arsenal. The most obvious criticism of his CV will be his lack of managerial experience and whether success in MLS could translate to the Premier League. To classify that simply by the league Vieira works in, however, would be a mistake.

A coherent approach – no matter the level

Vieira took over New York City FC ahead of the 2016 season, and has quickly moulded one of the most exciting teams in Major League Soccer – one that has finished second in the Eastern Conference two years running (and second overall in 2017). The play-offs remain a stumbling point for Vieira and NYCFC, though, and their pragmatic commitment to possession has clashed with the chaos of knockout-round matches.

But over the long, gruelling MLS season, Vieira has consistently proved that taking a modern, progressive approach can be achieved with the necessary commitment. NYCFC relentlessly play out of the back and build through possession, even if that means learning from mistakes along the way. The differences in pure talent are obvious, but similarities in philosophy between NYCFC and its City Football Group sister club Manchester City are also clear. That’s the whole point of CFG’s growing global network.

In 2018, NYCFC have shown growth in their ability to be multi-dimensional when necessary, proving dangerous in transition unlike previous years (when they were incapable of doing so with certain personnel like Andrea Pirlo). It made for an unbeaten first seven games of 2018 for NYCFC, before Sunday’s road loss to Portland.

Sure, but that’s just MLS, right? Arsenal couldn’t possibly see that as a proving ground for success in the Premier League, could they?

Well, it’s widely believed that parent club Manchester City have from Vieira's start in the Big Apple, having begun his managerial career in City’s youth development system. That may not mean the Frenchman automatically gets a seat on Manchester City’s senior-team bench one day, but the idea has obvious merit. Vieira was also on Newcastle’s shortlist before taking the NYCFC job.

That’s where things get interesting. Vieira has been linked with other jobs, like last year at Saint-Etienne, but moving to a mid-table club in England, France, Italy or anywhere else wouldn’t necessarily provide the long-term evidence available from Vieira’s ongoing body of work at NYCFC.

Design a clear vision for the club’s style of play: check. Implement it successfully while obtaining results: check. Identify and develop emerging talent: check. Build around a World Cup winner (David Villa) and carefully manage the phasing out of another on the decline (Pirlo; not to mention the inherited Frank Lampard fiasco). Vieira is doing that already for NYCFC in a league whose sometimes Byzantine rules make for much more complicated roster-building than a wealthy owner writing a bigger cheque on the open market.

Consider, too, the similarities between Vieira and fellow French legend Zinedine Zidane. Winner of back-to-back Champions League medals as manager of Real Madrid, Zidane controversially assumed his post with little experience on the bench. He came under fire early in his coaching career for not even having the necessary coaching badges.

Zizou worked in the background at Real Madrid for several years before taking charge of the club’s B-team. After 18 months of that, he made the mid-season jump to the main throne. His success since is undeniable.

None of this is to say that Vieira would achieve the same as Zidane if he were to move to a big European club. Nor is it to say that Vieira is even necessarily the best person for the Arsenal job, which will attract some of the best managers in the world. But it is to say the experience in successfully implementing ideas – those refined by learning from the best – in MLS is the same type of process which Vieira will be tasked with at any club.

Those philosophies have been shaped by an illustrious playing career, time in Manchester City’s coaching tree and through continued mentorship from his old manager – as recently as December. Vieira saw how much criticism Wenger endured in recent years at Arsenal, and says he has learned from it.

“Yes, of course, because you know that you will have ups and downs during the season," he said. “One day you will be the best coach and the next day you'll be the worst. So, it’s all about – I believe – how you can be consistent in yourself, and how you have to be consistent with the media; with the fans; with your players. I think it’s not having this rollercoaster where you are there, you are going down – no, it’s about being consistent. I think that’s something I took from the meeting.”

This is an important MLS season for Vieira, who is tasked with getting over the aforementioned play-off hump which has felled NYCFC in the conference semi-finals two years running.

An Americanised view of progress would be NYCFC advancing beyond that stage and winning the MLS Cup. Progress for Vieira’s vision, however, comes in the advancement of his team’s style – something already showing early in the 2018 season. It means avoiding the occasional mental lapses of past seasons, like the infamous 7-0 derby loss to the Red Bulls in 2016, and finding a way to solve the Achilles heel which is CONCACAF Champions League finalists Toronto.

Three years at NYCFC could be seen as an ideal amount of time before a bigger opportunity, but that’s a more complicated approach in this instance. City Football Group and Vieira have invested in each other; the ownership group likely wouldn’t take kindly to the manager taking over a rival club, even if it's where he became a legend as a player. But in Pep Guardiola, the Premier League champions currently have a man widely hailed as the best coach in the world.

If Arsenal doesn’t happen for Vieira, then the logical next steps for him would be to either continue building NYCFC until the Manchester City job becomes available, or to make that jump to a less prestigious club still in one of Europe’s big leagues. CFG would likely still see that as a lost investment, though, barring some convoluted handshake that Vieira would return down the line. If you're CFG, to what lengths do you go to keep Vieira in the system? Even if that doesn't play out now, during this Arsenal coaching search, it's a question that will only grow louder.

Would Vieira want to live in the shadows of Wenger’s exit anyway? It’s a tall order (insert obligatory David Moyes reference about being the guy after the guy). And would Arsenal want a manager who is similar to Wenger – a disciple of his, even? Or would the Gunners board prefer a clean break and an entirely new approach?

Much like Wenger answered endless questions about his future, Vieira will continue to do the same. As he said last year, that’s part of the job. The question is: which job?