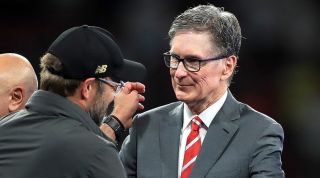 It’s an August evening in 2010 and Joe Januszewski is relaxing in his Boston home. Well, not exactly relaxing but feeding his young son some food.

Across the pond on Merseyside, Liverpool’s American owners are making a dog’s dinner of running a club that has rarely been so far off the pace.

The club have appointed Roy Hodgson as manager but the natives are restless. With Liverpool knee-deep in debt, that’s hardly surprising. By the time August is out, the stands of Anfield will be filled with red cards brandished in the direction of Tom Hicks and George Gillett.

And then a phone rings on America’s East Coast.

The course of Liverpool’s history is changed for good, yet the conversation that ultimately provides salvation isn’t a straightforward one.

“The phone kept cutting out,” Januszewski laughs to FourFourTwo. “Here we were discussing the future of one of the world’s biggest football clubs, and the noise from the Toronto Blue Jays Stadium meant I was only picking up every other word.”

As it happened, that was plenty.

Januszewski is now an executive vice-president at the Texas Rangers Baseball Club, but formerly worked for Fenway Sports Management (FSG) at the Boston Red Sox. He was, he readily admits, ‘the soccer guy’ in an office where the beautiful game was most definitely not the only show in town. Luckily for Liverpool, his voice was also a highly respected one.

Exuding enthusiasm, Januszewski emphasises to FFT that his intervention shouldn’t be overplayed. But there’s little doubt that in summer 2010, with Liverpool on their last legs, his concise email to John Henry – the initial outcome of that conversation on his sofa - and the rest of FSG's management board played a critical role in helping the club to their feet. And then some.

“I'd gone over there [to England] on a business trip a few years before under the guise of the Fenway Sports Group, and went cap in hand to several football clubs, county cricket organisations and rugby league clubs,” he says. “I was trying to talk to them about the sales and marketing schemes we'd implemented in the United States in Major League Baseball with success.

“We got a great response from everyone we met with – from Edinburgh to Reading and everywhere in between. But it’s hard when you’re asking clubs to spend money on a consultancy to help them improve their business. I was unable to convince anyone to pay FSG to allow us to consult. But that really piqued my interest and showed the incredible opportunity for growth in English football back then.”

Fortunately for Anfield regulars, that passion remained with Januszewski long after he flew home without a purchase order in sight.

As an American, he had witnessed the commercial growth of the Premier League first-hand; the massive increase in overseas television revenue meant that he no longer had to slope off to a Boston drinking hole in the early hours of Saturday morning to watch Liverpool play.

“I could screen Premier League on FOX and then NBC,” he says. “We could suddenly watch more football in the US on a Saturday than you can there in England. I think my owners eventually got tired of hearing about it because they weren’t soccer guys. They are, though, businessmen. And in August 2010, maybe they were in a whimsical mood.”

Within two hours of Januszewski’s email – or sales pitch - Henry had fired back a response. The following day they set up a working group with a view to mounting a takeover of the club.

“Literally 66 days later, Fenway Sports Group had secured the purchase of Liverpool FC,” Januszewski says. “I was fortunate to be part of the deal team and to be over there when we closed. I was there when we got introduced to the team and it was a whirlwind experience. It was the best business transaction I will ever be a part of, because I’m so passionate about Liverpool.

"I wasn’t working in soccer, I was working in baseball, but this was the greatest sales job I had ever done – to convince my owners who weren’t really interested in soccer to buy Liverpool. Now, of course, they’re all very passionate, they love the club and they love the supporters. And they’ve done an incredible job.”

You can’t argue with that. When FSG first arrived on Merseyside, Liverpool were looking down rather than up. Qualifying for the Champions League, let alone winning it, was Mississippi Mud Pie in the sky.

Now, as they prepare to take on Manchester City in the Community Shield, they do so as European champions. Little wonder that Januszewski’s grin is as broad as the Atlantic.