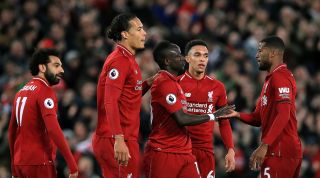 Liverpool were almost perfect last season, so how do Jurgen Klopp’s side repeat a points total that would have been enough to comfortably win the title in every Premier League season except the last two?

The 2019/20 season marks 30 years since the league trophy last adorned the Anfield trophy cabinet, and Liverpool’s owners themselves have said the Premier League is now their priority. The title is what's required for the club to get back on its perch.

Doing so won’t be easy, with Manchester City unlikely to drop off dramatically and Tottenham having strengthened their squad this summer. Jurgen Klopp has resisted calls to strengthen his own group from what many would deem a position of power, instead opting for just two teenage additions and earmarking Alex Oxlade-Chamberlain, Rhian Brewster and Adam Lallana as being like the proverbial ‘new signings’.

Another title challenge is expected, but will Klopp’s squad be able to cope with the pressure in 2019/20? Here’s what we think will happen at Anfield this term...

Liverpool managed their record top-flight points total by registering 97 last time out, but that wasn't enough to edge out Manchester City at the top of the pile. Nevertheless, it was an incredible achievement from the Reds, who had to deal with the pressure of a title race alongside an incredible Champions League run.

It will be difficult to repeat the feat in 2019/20, especially as the club's key players largely avoided injury last season. Liverpool probably won't better their tally from 2018/19.

The last Liverpool player to score more than 20 goals in all competitions in three consecutive seasons was Michael Owen, from 2000/01 to 2003/04. Since then, Fernando Torres, Steven Gerrard and Luis Suarez have all hit the 20-goal mark for two campaigns on the bounce, but never three.

Salah followed up his incredible debut season of 44 goals with 27 in all competitions last season. Another 29 this season would also see him clock up 100 in record time. Maybe, then, the doubts about him would well and truly be put to bed.

Alisson helped transform Liverpool’s defence during his debut season at Anfield, beating Pepe Reina’s record by keeping the most clean sheets in the division. Reina won three consecutive golden gloves in his opening years at Liverpool, and Alisson could well match that if he and Liverpool’s defence remain as sturdy as they were last term.

The Reds conceded the fewest goals in the league - just 22, which was last achieved by Manchester United back in 2007/08. Reina kept 39 clean sheets in his first two seasons in England, so another 18 for Alisson would see him match the Spaniard's return.

4. Winter run to cause problems

Jurgen Klopp’s Liverpool have tended to struggle in winter, and the team's form has often suffered in January. Throw in a trip to Qatar for the Club World Cup just before Christmas and it’s easy to forecast a problematic patch over the festive period.

Liverpool are due to travel 3,000 miles to Doha in December, which means the postponement of their scheduled meeting with West Ham. Leicester then await on Boxing Day – and how Brendan Rodgers would love to beat his former club at the King Power Stadium. Throw in the FA Cup third round and Liverpool stand to play nine games in 31 days. Klopp won't be happy.

Already the Premier League’s youngest ever player, Elliott could become Liverpool’s youngest goalscorer of all time if he notches before the end of the 2019/20 season. The record is currently held by Ben Woodburn, who netted against Leeds United in a League Cup tie aged 17 years, 45 days. But Elliott doesn’t even turn 17 until April 4.

The talented winger looks set to hover around the first team this season and could get an opportunity in the domestic cups. With an eye for goal and lethal left foot, the boyhood Liverpool supporter could earn a place in club history.