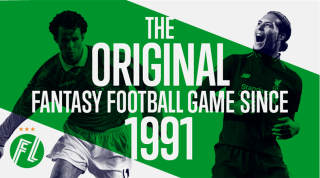 You’ve been here before. It’s five weeks into the Premier League season and already your pals’ teams are looking annoyingly like your own.

Everybody has Mohamed Salah. Everybody is profiting off Sergio Aguero’s hat-trick against Southampton. And everybody has just won the same points as you for that brace of assists from Raheem Sterling. Yawn.

But it doesn’t have to be this way.

Fantasy League’s auction format is how fantasy football was designed to be played; the original game first created in 1991 which truly influenced a global phenomenon.

The premise is simple: create a league with your friends, then get together (face-to-face or online) and bid against each other in a hotly-contested pre-season player auction – football meets poker with beer, if you will.

If you’ve got Sadio Mané, he’s yours and yours only to reap the rewards from. Squads are unique, therefore – just like in the real world.

The auction format also creates a real transfer market: each league has a monthly window where managers bid against each other via online sealed offers for free agents, and can also arrange swap deals between themselves.

Fantasy League prides itself on a simple but proven scoring system which helps leagues to remain tight throughout the season. Unlike in other popular versions of fantasy football, catching up with a runaway leader isn’t an impossible ask.

Fundamentally, it creates a more realistic and engaging way to play fantasy football – and the numbers show it works, too: 86% of users are active at the end of the season, while 95% stick around for another year. Remarkably, 75% of leagues have played for 10+ years.

If this sounds up your street – and of course it does – step right this way: Fantasy League are giving all new players the chance to set up their league and play for FREE in 2019/20. Simply head to www.fantasyleague.com and start inviting managers. You can recruit on WhatsApp – it’s easy.