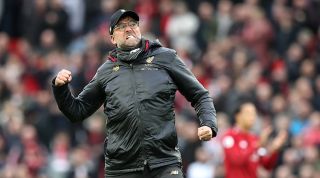 Liverpool notched their 400th goal in all competitions since Jurgen Klopp took charge in October 2015, hoisting the Reds back on top of the Premier League table – or at least until Wednesday night anyway, when Manchester City play their game in hand against Cardiff.

You won't be too surprised to learn who the three players at the top of this quiz are – and who share the net-ripplers around admirably, it must be said – although it may be more shocking to learn that there's no outright leader between them for the moment.

We'll warn you, though: this quiz is much harder than you might expect, and by the end you'll almost definitely be tearing out what little hair you have left.

We’re not so harsh as to include the 10 own-goal scorers, however, so that takes the total down to a mere 390. There are 36 players responsible for that haul, so now it’s time to name those Red men.

Six minutes are on the clock and each player’s goal total (all competitions) and playing position is below. Let us know how you get on @FourFourTwo – we’ll retweet the best efforts, if you don’t give answers away – and please challenge some chums while you’re at. Ta!