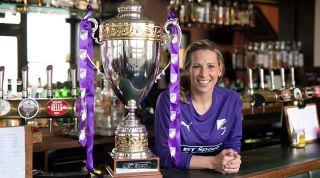 My hero growing up was... Peter Schmeichel. He was the first one I looked up to as a goalkeeper. I've always been a Burnley fan and the first goalkeeper I remember there was Chris Pearce – the 1988 Sherpa Van Trophy final was the first ever game I went to, and he was in goal. I got to meet him a few years ago!

The one thing I would change about football is... Players rolling around. Being involved has always been so exciting, but that’s the only thing I don't like, simulation. Boring, get over it, stop doing it.

The day football broke my heart was... Tearing my cruciate for the first time, because I felt I never quite got back to how I was before that. That broke my heart and kept niggling at me for the next 10 years afterwards.

I've never told anyone this before but... When I was seven, the ball did cross the line in the Cadbury's Mini-Champions Five-a-Side Tournament, and I was adamant that it hadn't! I was a natural-born winner, I couldn't help it. I was too competitive!

If I could have dinner with anyone, it would be... Michelle Obama – her and Condoleezza Rice. My husband's involved in the golf world and Condoleezza has broken down a lot of barriers. I spent time in Alabama in the deep south when I played in America, and I understood that real deep-rooted racism. I think both Michelle and Condoleezza have done a lot to counter that. Condaleeza was the first ever female member at Augusta, and that was a huge step. I'm just really interested in that drive they have, and not accepting that what has always happened is right.

The best player I ever played with was... Kelly Smith, definitely. She was a wizard with that left foot. The first time I played against her, I’d just turned 15 and I didn't know who anyone was. I'd signed for Liverpool and the first game was in August against Arsenal at Anfield.

There was this similarly young girl who'd just started playing; she was 17 or 18. The ball was crossed over and she volleyed it from 23 yards, outside of her left foot into my top-right corner. I was like 'Bloody hell...' Playing against her was always a nightmare but playing with her was unbelievable because she also had that raw fight, grit and nastiness  – you wanted to play with her for England.

The funniest player I ever played with was... Sammy Britton, who I'm still really good friends with. She used to play for England and just used to say anything that no one would say – you'd think, 'Don't say that!' Cringeworthy stuff. Nothing that was ever printable – effing this, effing that and making people feel uncomfortable – but it lightened the mood for everyone.

And also Jill Scott, who's in the current squad – she’s similar, although not quite as coarse! Both are still really good friends of mine and I'd always pick them for my team.

Rachel Brown-Finnis will manage one of the teams in the women's tournament at this year’s BT Sport Pub Cup. To enter your team into the competition, go to www.btsportbusiness.com/pubcup. Entries close on Sunday, March 31.