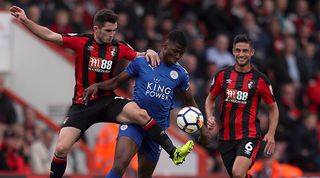 Awkward. Like Frank de Boer, Riedewald was signed as part of the progressive football revolution at Selhurst Park. A centre-back or midfielder happy with the ball at his feet, he was one of the first steps towards a more sustainable style; bought as part of the drive towards a game which didn’t depend on counter-attacking pace.

The only problem being, obviously, that Steve Parish panicked, sacked De Boer and left Riedewald as a white elephant. His inclusion here isn’t really a judgement of the player himself, then - he made his second start of the season against Manchester City and actually played quite well - but instead reflective of the wastage clubs are willing to endure to support their short-termism.

As per the above: managerial turnover causes myriad problems and players signed under one regime aren’t always valued by the next.

Iheanacho has been in the “highly promising” category for years now and not unreasonably so. He’s an adept finisher who can play either as a main centre-forward or a supporting striker, but has nevertheless fallen between the cracks at the King Power Stadium. He has one goal to his name - against Leeds in the League Cup - but hasn’t found the target (or a regular place) in the Premier League and already looks like a lost soul.

"Kelechi is a young player and he needs to improve aspects of his play," Claude Puel noted recently. Not much, then.

The biggest mystery here is not why Everton signed Ramirez - at that price, why not? - but how they didn’t find a use for him. Ronald Koeman had plenty of other issues, but one of the most prohibitive before his sacking was the team’s lack of pace - up front and in wide positions. Given that Ramirez’s position exists somewhere between the two, surely Everton could have extracted more from him than just three league starts and a negligible contribution.

Apparently not, and Sam Allardyce – despite being faced with many of the same problems (albeit now equipped with a fit-again Yannick Bolasie) – has shown little interest in the Spaniard. The Toffees chief is rumoured to be on the verge of loaning him back to La Liga.

Privately, Daniel Levy was probably delighted with this deal. Wimmer had arrived at Spurs in the summer of 2015 for a paltry fee, shown himself to be an adequate-but-limited defender over the course of two years, and was then sold for nearly four times his original price.

As with everything to do with Stoke, this deserves an asterisk. At the risk of sounding like part of the BIG MEDIA CONSPIRACY which has hounded a grossly underperforming manager out of a job, it’s very hard to judge any of these players in isolation. However, Wimmer has still been part of a defence which conceded five times to Chelsea and Tottenham, seven to Manchester City, and which has shipped by far the most goals in the league.

Most people quite understandably expected Hart’s return to England. The year in Torino, with its mis-steps and errors, was easy to dismiss as part of a culture shock. Back in the Premier League, all would be fine. Right?

Well, not so much. It’s not that his loan deal has been a disaster - although you could argue that it has been - more that it’s been extremely difficult to watch. Revisionists will tell you that Hart was never that good and inflated by the colour of his passport, but that’s not true - instead, he’s suffered a late-career decline for the ages, losing all his confidence and most of his reputation.

And now he’s lost his place at West Ham, too, which obviously threatens his England place.

Controversial perhaps, but hardly unreasonable: Ibrahimovic may well be a genetic anomaly of a footballer, but the decision to bring him back is hard to rationalise. Beyond all the lion shtick and the Swede’s preposterous personna, he is - as Jose Mourinho recently admitted - just a player in his late thirties with a bad knee.

Tactically, it’s also difficult to understand: he’s a static forward who expects the attacking patterns to form around him, whereas Mourinho - between Romelu Lukaku, Anthony Martial and Marcus Rashford - has tried to construct a more attacking unit at the top of the pitch.

Ibrahimovic is presumably an asset to the club’s marketing department, but seems unlikely to have an impact on anything else during this second spell. An iconic footballer, certainly, but one who belongs to the past.

After a disappointing summer, West Brom needed something – but what they landed on was a player who has managed just 160 minutes of football in four months, made just a single start, and doesn’t seem to come close to justifying the hype which surrounded his original move to the Bundesliga.

While doing their due diligence, the Baggies might have wondered why, having only signed Burke a year ago, Leipzig were so willing to sell.

Is Mesa a capable midfielder? Maybe, but he hasn’t really had the opportunity to show whether he is or isn’t - a legacy of (another) poorly thought-out transfer window in south Wales. In a way, he’s become symbolic of the problems with signing foreign players late; without time to adjust to their new environment, they look hopelessly ill-equipped.

And Mesa has. He’s been a non-factor in Swansea’s turgid season.

To think that Burnley’s decision to accept Watford’s bid for Gray was actually criticised in the summer.

The ex-Brentford man isn’t a bad player, but then neither is he obviously good enough for the Premier League. He’s shown a nice touch in front of goal in the past and enjoyed some impressive moments last season, but he has been singularly unremarkable at Watford, missed chances at important moments and seems to belong at a slightly lower level. Someone at Watford got a little carried away with the television money…

Another dreadful loan. Sanches’s career will recover and he will doubtless go on to achieve a lot in European football, but this is not a move that has worked out well. With the benefit of hindsight, perhaps Paul Clement should have thought twice when Bayern Munich said yes to sanctioning it – Sanches had barely kicked a ball at the time of his arrival, and had to be reconditioned - after the season began - to an entirely new league of which he had no prior experience

Sure enough, the Portuguese has spent the first four months fighting niggling injuries and having to adjust to English football’s speed and physicality.

Sigurdsson’s success at Swansea was predicated on him being a focal point – and, just as importantly, having players around him who complemented and responded to the way he plays. At Goodison Park, he has almost the opposite. He is one of many central playmakers operating in a position which doesn’t really suit him, and his strengths have been almost negated by the absence of a line-leading centre-forward who would profit from his delivery.

Most of all, though, the crime of this transfer was its timing. Everton spent all summer sort of chasing Sigurdsson, but without matching Swansea’s asking price. As a consequence they lost on two counts: they still had to pay that huge fee and also lost the opportunity to involve the player in pre-season.

Eredivisie transfers always seem to be a flip of the coin, and this one exemplifies that better than most. Klaassen isn't quite Afonso Alves - yet - but he’s quickly fallen out of consideration at Everton in spite of a £20m+ fee. It’s actually worse than that: the 24-year-old hasn’t actually been seen on a Premier League pitch since an unspectacular performance against Bournemouth in September, and been limited to Europa League appearances ever since (a competition that the club lost interest in almost immediately).

Sam Allardyce has made some vaguely encouraging noises, including talking about the club’s responsibility to players settling in a new league, but a January move already looks like being in everybody’s best interest.