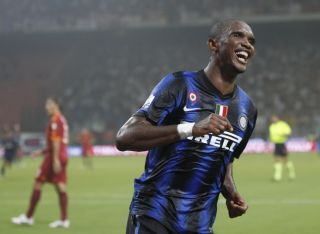 FIFA. Mere mention of the word is enough to prompt many to jump out of their seat and start fist-waving and booing, faces contorted with rage. Like investment banks or coalition governments, FIFA are not currently the most popular of institutions.

For the most part, FIFA are in the dock for mysterious decision-making procedures and a lack of transparency that has led to allegations of corruption. Discussions on FIFA's moral code are for a different column, but on a personal level and from an African point of view, I couldnt help but do my own bit of aggrieved fist-waving at another recent, FIFA-sponsored decision - the 2010 Ballon D'Or awards.

Running through the Fifpro World XI, for the second year running the same question popped into my head: Where is Samuel Eto'o?

Where is the only man in the history of European football to win back-to-back trebles in two different countries? Where is the man who in 2010 became the first player ever to score in seven different competitions in one calendar year? Where is the man who sits in an elite list of four players to have won the Champions League two years running? Given these unique and astonishing achievements, where was Cameroon's finest when accolades were handed out in Zurich?

Displacing the Barcelona trio of Xavi, Iniesta and Messi - Eto'o's former colleagues - from the player awards was always going to be near impossible. But could the Cameroon international not expect a place in the World XI, where David Villa was elected in his place?

That Eto'o was excluded from the last two Fifpro World XIs can arguably be deemed unfortunate. The 2009 team had Messi, Cristiano Ronaldo and Fernando Torres upfront; the 2010 team Messi, Ronaldo and Villa. Statistically, however, Eto'o comfortably outperformed Torres in 2008/2009 and lifted more silverware than Villa in 09/10.

FIFA's glitzy ceremony made no special mention of Eto'o's achievements, less so craft a personal award to reflect heights that could feasibly never again be reached. Nevertheless, though international recognition eluded Eto'o in Zurich, 2010 was a golden year for a man whose career is defined by the challenges of defying huge odds and proving critics wrong.

Raised in Douala, it was undoubtedly on the sinister, unforgiving streets of Cameroon's largest city that Eto'o acquired the hard-headedness and sheer iron-willed determination to succeed that has underpinned his professional life. "In Douala, it is pure desperation," says Italian journalist and African football expert Filippo Ricci of the city. "Violence and poverty punches you in the face, a much less amiable vision of life." "Very, very humble," Eto'o says of his upbringing.

Eto'o grew up with his parents and five brothers and sisters. To feed the family after Eto'o's father lost his job in accounting, his mother would get up every morning at 3am to buy fish at the seaside city's port and resell it. So when the wide-eyed youngster's big chance came at 12 years old, Eto'o snatched at it with the predatory striker's instinct he has shown time and time again on the pitch.

"Professionally, I did not waste 'my chance', since I was ready, in the right place and at the right time to shine out in what I like most," Eto'o proclaims on the front page of his foundation's website. "I dreamed of experiencing what I am living now without calming my enthusiasm, because without it nothing is possible."

Within a matter of years Eto'o quickly rose from Douala-based academy l'Ecole de Football des Brasseries du Cameroun to Real Madrid, signed by the Spanish giants in 1997 after being scouted playing for Cameroon's Under-16s.

This voracious appetite and sheer strength of character epitomises Eto'o's career, but not without being sternly tested. Eto'o has been forced to prove himself repeatedly in the face of critics. Rejected by Real Madrid, the subject of persistent - and rather unfair - questioning of his attitude at Barcelona, and again scrutinised in the early days at Inter Milan for a supposedly poor goalscoring record, despite playing in an unfamiliar position from the right.

Add this to the frequent racism he has had to deal with both in Spain and Italy and you begin to grasp the character of a man whose desire to succeed has helped overcome obstacles that would prove too much for many.

In a sense, Eto'o's snub at recent FIFA ceremonies can therefore be viewed as a microcosmic representation of his career: glorious achievement undimmed by a constant struggle for recognition and acceptance.

Barcelona was an example of this. In many respects Eto'o is a true son of Catalonia - rejected by the establishment (Real Madrid) before going on to prove the decision's folly by rubbing it in their faces.

Eto'o rammed it down Madrid throats by scoring at the Bernabeu in four consecutive seasons for Mallorca then Barça, and in 2005 he was fined by Spanish football authorities for singing "Madrid, cabrón, saluda al campeón" ['Madrid, bastards, salute the champions'] at a title-celebrating party.

Yet Pep Guardiola never took to Eto'o, immediately stating the player could leave after becoming coach in 2008. Eto'o remained and scored 28 league goals in Barca's all-conquering 2008/09 season. But while others from that extraordinary team received contracts for life, Eto'o was discarded.

At Barcelona Eto'o was regularly accused of being a troublesome disruption. But how can a team with bad eggs win everything? How can a player so well-liked in the dressing room be a bad influence?

"People think he is unprofessional and a bad teammate, as if he were a time bomb waiting to explode in the dressing room, but he is nothing of the sort," said Xavi of Eto'o in 2008. "He is a fine example of professionalism. He surprises me with his enthusiasm and the sacrifice he makes in every game. He wants to be the best, and he is."

Xavi was no less complimentary upon Eto'o's departure. "The truth is that Eto'o has left such a mark on and off the field that it has become quite clear that we miss him. Samuel is part of this club's history."

Iniesta's reference is equally glowing. "I do not know if there has ever been a striker like him before. What I do know is that Barça should build a statue in his honour." Bad influence? His 152 goals in 232 games put Eto'o among the most prolific goalscorers in Barcelona's history.

A similar tale of doubt and disparagement befell Eto'o in the early days at Inter. A tally of just eight league goals up to March led to harsh criticism in Milan and the Cameroonian was quickly written off. Too quickly.

"Eto'o has lost it," proclaimed a Gazzetta dello Sport headline in March 2010. Days later, Eto'o hit the decisive strike against Chelsea at Stamford Bridge to book Inter's place in the Champions League quarter finals. This season he has 24 goals to date, including this wonderful free-kick scored in a majestic recent performance against Bologna.

The 29-year-old has undoubtedly made some high-profile mistakes in his career, headbutting a Chievo player the most recent misdemeanour. But point to me a man who has never made mistakes and I will point to you a liar.

"I mean to run like a black man so I can live like a white one," Eto'o famously remarked when he signed for Barcelona. Ignoring the crudity of the statement, this he has achieved. Eto'o now lives in luxury apartments and stays in boutique hotels whose nightly rates are greater than the average salaries of those in his hometown.

But it is Eto'o's incredible hunger and extraordinary kind nature, not the number of zeros in his bank account, that define him as a player and a man.

Examples of his astounding generosity are numerous. Like the time he donated €30,000 to Real Mallorca supporters travelling to the 2003 Copa del Rey final for them to enjoy 'a grand paella' together. Or the time he spent $1.3 million on designer watches for his international teammates after qualifying for the 2010 World Cup. The humanitarian work done by his foundation

FIFA awards may have eluded him lately. But when it comes to trophies, Eto'o's unique double treble, alongside numerous other honours, highlights his place in the history of European and African football as dazzlingly brightly as the burning inner zeal that carved the name of a small boy from Douala's humble backstreets into football folklore.