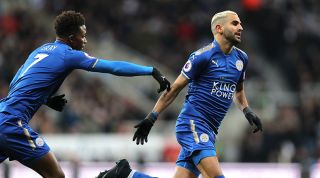 The Magpies burst out of the blocks at St James' Park and were rewarded for their industry as early as the fourth minute when Joselu slotted home from 10 yards. But their lead didn't last long.

Leicester levelled in the 20th minute - and it was some strike. The ever-dangerous Riyad Mahrez advanced towards a retreating Newcastle backline before unleashing a vicious 25-yard rocket that was too hot for Karl Darlow to handle.

The Foxes went ahead in the 60th minute when Demarai Gray's deflected effort finished off a delightful move involving Mahrez and Marc Albrighton. But the hosts responded impressively and were level 13 minutes later, also courtesy of a deflection - this time it was Dwight Gayle who profited from Harry Maguire's misfortune to make it 2-2.

There was plenty of time for a winner, however, and the visitors found it through Perez, who inadvertently poked home from close range in trying to stop Leicester forward Shinji Okazaki from doing the same.

It was tough on Newcastle, who have now lost their last three at home.

An early strike from Marko Arnautovic was enough for West Ham to earn an unexpected – but thoroughly deserved – victory over Chelsea at the London Stadium.

It was the Austrian's first goal since arriving from Stoke in the summer, and he proved a threat throughout a game in which the visitors never really got going.

Arnautovic grabbed the game-winner in the sixth minute when he linked up with  Manuel Lanzini on the edge of the area, before curling a beautiful left-footed shot into the far corner.

Chelsea enjoyed lots of possession and their first chance arrived on 20 minutes when Eden Hazard's cross-cum-shot somehow evaded everyone in a packed penalty area. N'Golo Kante and Alvaro Morata also tested West Ham keeper Adrian without success before the break, as the hosts weathered the storm to keep their lead.

Chelsea didn't have a single shot on goal in the second half, with Morata having their best chance when clean through late on. But David Moyes's men - who were well organised and showed fine spirit throughout - hung on for their new manager's first victory.

The visitors went a man down on 39 minutes when Marvin Zeegelaar's two-footed challenge on Steven Defour was deemed worthy of red card by referee Lee Probert. Shortly afterwards, on the stroke of half-time, Burnley grabbed the initiative.

A low ball in from Johann Gudmundsson was dummied cleverly by Jeff Hendrick, allowing Arfield a clear sight of goal. The winger duly obliged, slotting home across Heurelho Gomes in the Hornets' net.

Despite their disadvantage, the visitors remained competitive in the second half. But Burnley always looked more threatening, and had two goals disallowed in the second period – much to the annoyance of boss Sean Dyche. It mattered not in the end, though, as the Clarets recorded their fifth win in seven games.

A cracking encounter at Selhurst Park ended with honours even between Crystal Palace and Bournemouth.

Jermain Defoe notched twice for the visitors - his opener was also the 200th league goal of his  career - but it wasn't enough to claim the spoils for Eddie Howe's men. Indeed, but for a late penalty miss by Christian Benteke, Bournemouth could have left south London empty handed, which would have been undeserved.

Defoe's opener was cancelled out by Luka Milivojevic 's cool 41st-minute penalty, after Wilfried Zaha was felled in the box by a joint effort from Cherries keeper Asmir Begovic and Nathan Ake. This was the start of a crazy four-minute spell right before half-time, in which three goals were scored.

Palace went ahead through Scott Dann, before Defoe again found the back of the net - this time in stunning style - to ensure his side went into the break level.

Benteke then had an opportunity to win it in stoppage time from the spot, but his effort was poor and straight at Begovic. Fast and furious indeed.

A much-needed three points for struggling Huddersfield, who overcame a Brighton team without a win from their last five Premier League outings.

The hosts had Steve Mounie to thank for this victory, as the striker netted twice in the first half. The Benin hitman broke the deadlock in the 13th minute when he slotted home from close range following a corner - his first goal since an opening-day double.

His second also came from a corner. The visitors cleared the initial delivery, but Mounie was left unmarked inside the six-yard area when the ball was swung back into the box by Aaron Mooy. His header was weak, but Brighton keeper Mat Ryan made a mess of it and the hosts had some breathing space - which proved enough for all three points and only their third win in 14 league games.

Swansea earned a priceless victory over fellow strugglers West Brom at the Liberty Stadium thanks to Wilfried Bony's late strike.

Bony netted his second goal in as many games in the 81st minute to give Swansea just their second win in 14 league outings, and lift them off the bottom of the table at Crystal Palace's expense.

It wasn't pretty in west Wales but the result is huge for Paul Clement's men, who will hope to use this as a springboard for a revival in the busy weeks to come. Bony settled matters late on when the ball fell to him in a crowded box, and his powerful, close-range strike was unstoppable.

The home side didn't manage a shot on goal until the 70th minute, and while the visitors had a chance through Salomon Rondon to level shortly after they'd gone behind, Alan Pardew's men couldn't avoid another defeat on the road.

Spurs hit Stoke for five at Wembley, as Harry Kane returned to the scoresheet with a brace.

This was more like it from Tottenham. Mauricio Pochettino's men were without a win in four league games, but didn't look back after Ryan Shawcross handed them the advantage with an own goal in the 21st minute.

They doubled their lead through the excellent Son Heung-min in the 53rd minute, after a lovely move featuring Dele Alli among others. A minute later Spurs had their third as  Kane latched onto Ben Davies's cross to head home through Jack Butland's legs. Kane added his second - Tottenham's fourth - 10 minutes later after Christian Eriksen's pass wasn't dealt with by the Stoke defence.

Eriksen himself got on the scoresheet in the 74th minute, and although Shawcross netted a consolation for the Potters late on, this was a game to forget for sorry Stoke.