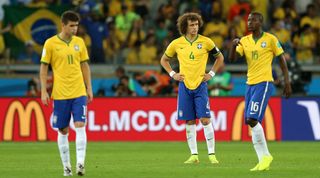 Every now and then, games come along that make you say words you didn't even realise existed. This was one of those.

In 18 obscene first-half minutes, the Brazilian dream was over. Over, that is, in the sense of being utterly obliterated by a devastating Germany side who are now one game away from lifting the World Cup for the first time in 24 years. Die Mannschaft were simply breathtaking; cold-heartedly and ruthlessly, they silenced Belo Horizonte's Estadio Mineirao with an unforgettable first-half show in which Miroslav Klose usurped Ronaldo as the World Cup's top goalscorer.

After the break it got worse: Brazil huffed and puffed in search of a shred of pride, before their dead-eyed opponents netted twice without breaking sweat through super sub Andre Schurrle.

It's impossible to say how Brazil would have fared with talisman Neymar had The Boy Wonder been fit, but in the end Germany stopped short only of excrementing on the No.10 shirt held aloft by the Selecao to honour their crocked star before kick-off.

There wasn't much hope for the beleaguered hosts in this one, but for the opening 10 minutes they were the better side. Spurred on by the adrenaline of a semi-final on home soil, Luiz Felipe Scolari's men began brightly, passing the ball quickly with an emphasis on getting it wide early.

Then it wore off, before evaporating almost instantly. It started when they left Thomas Muller unmarked from a corner, and ended with an inevitable opener courtesy of the Bayern Munich man's right boot.

The tone was set. Germany set about linking their busy front three, and hit three goals within as many minutes. First, 35-year-old Klose notched his 16th and history-making World Cup finals goal after tapping home the rebound from his own shot. Then the outstanding Toni Kroos rifled home a third from the edge of the box after an incisive German move down the right, before the Real Madrid-bound midfielder completed the World Cup's quickest-ever double from Sami Khedira's pass.

By this point it was like the vast majority of those 58,000 inside the Estadio Mineirao had been greeted with a surprise funeral, rather than the alternative occasion usually blessed with streamers, music and an expertly-iced cake. Yet before there was even time to take stock of the madness breaking out, the Germans had a fifth goal to celebrate. This time it was the equally-excellent Khedira who capitalised, breaking forward before exchanging passes with Mesut Ozil and placing home.

At 5-0 down, Brazil had still seen significantly more of the ball – 46 passes' worth, in fact – but had used it mainly in their own half where they made mistakes. While Scolari's men continued to probe down the wings, Low's team were throttling them through the middle. 3 of their 4 assists were short, quick passes inside the box that had David Luiz and Dante tied up in knots.

At half-time the picture was clear: Germany had been ridiculously clinical. 7 of their 10 efforts were fired on target, with Julio Cesar keeping out only 2 of them. Brazil, on the other hand, had only a wayward effort from range to show for themselves.

After the break, the battered hosts had a go at slimming the deficit. As it natural with any side chasing a lost cause, Brazil enjoyed a wave of possession after the restart and tested Manuel Neuer with some menacing attempts. The Bayern shot-stopper did his quest for the Golden Glove no harm, despite the scoreline suggesting otherwise.

Germany barely ventured out of their own half as they rode the wave – not that they needed to – so there was a crushing inevitability about their sixth goal via substitute Schurrle. The Chelsea man had already been one of the finest impact men at this World Cup so far, but couldn't have done more to persuade Low about a final start here if he'd threatened him at gunpoint.

His first goal was a simple finish from Philipp Lahm's square ball, the second not so much; collecting a Muller pass from the left, the 23-year-old arrowed a beautiful drive under Cesar's crossbar to put the gloss on the World Cup's biggest semi-final trouncing.

The goals were typical of a Brazilian evening which became more demoralising by the second. Schurrle's goals, Germany's sixth and seventh, came from 2 of their 3 second-half efforts. (Ozil should have netted with the fourth, but slotted wide.) Scolari's men, meanwhile, were joyless in their first 9 attempts after the restart.

The victors were driven by their flawless midfield duo of Kroos and Khedira, though Bastian Schweinsteiger barely put a foot wrong behind them either. Kroos' 2 goals put him firmly in the frame for a shout at the Player of the Tournament prize, capping another assured display in which he made Germany tick. Unsurprisingly, no player made more passes (66/71), while yet another of his set-pieces produced a goal.

Meanwhile, this was also a display to vindicate the restoration of Bayern skipper Lahm to his usual right-back role. The 30-year-old laid on 2 of the 7 goals, created another goalscoring chance on top of that and completed 3/4 of his tackles at the other end.

It didn't help that Silva was suspended; more so, it didn't help that David Luiz played like an unshackled lunatic. Not only did his marauding runs forward leave gaping holes between himself and Dante (as the passes received graphic below shows), his passing was adventurous. Of his 36 forward, 17 were attempted long balls with varying degress of success. Giving the ball back to Germany, though, ain't clever.

Now the inquest begins for Brazil. Dreadful defensive errors were to blame on this occasion, although this was a day where nothing went in their favour at either end. When Neuer wasn't frustrating them as the last line of defence, Die Mannschaft's centre-backs were doing a pretty good job of it elsewhere: Brazil were unsuccessful with each of their 21 crosses.

What began with those memorial-like tributes to Neymar now ends with a post-mortem of Brazilian football. It's something to take the mind off Maracanazo, you might say.