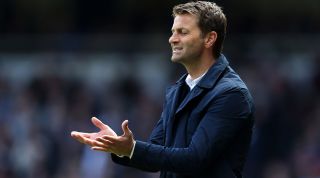 Sherwood’s dismissal means there may only be only a handful of crap English managers in the top flight at the start of next season, a far cry from the early Premier League years, when the number of crap managers from England would routinely top 50%.

A spokesman for the Crap English Managers Association told FourFourTwo: “When Norwich fired Chris Hughton it was a massive blow to crap English managers everywhere, and Spurs getting rid of Sherwood just rubs salt in the wound.

“At least Pardew is still there to fly the flag.”

These are hard times for crap English managers, whose longstanding reliance on bacon butties and shouting in lieu of coaching qualifications have occasionally seen them appear outdated.

While at Spurs, Sherwood routinely criticised Premier League clubs for appointing bosses with a modicum of tactical awareness, claiming that managers like him were discriminated against for not knowing what a defensive midfielder was.

Former CEMA poster boy Steve Bruce was suspended from the organisation after Hull's excellent start to the season, though he is expected to be reinstated after Sunday's FA Cup final defeat to Arsenal.

Elsewhere, Garry Monk of Swansea has not yet done enough to be considered crap, while CEMA have “grave concerns” about Leicester’s Nigel Pearson and Burnley’s Sean Dyche, both of whom seem far too good at their jobs to merit inclusion in CEMA’s ranks.

“We’re not even sure we can count on Steve McClaren any more, which would have been unbelievable a few years ago,” the CEMA spokesman concluded. “Everyone’s just praying that West Ham give Sam Allardyce the long-term backing he so clearly doesn’t deserve.”