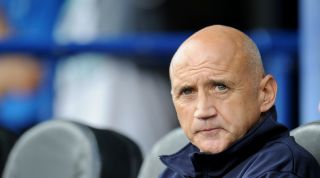 The 62-year-old Money took over a flailing Solihull side on October 5, and has struggled to turn the club's fortunes around and leaves them bottom of the National League.

However, one highlight has been Solihull's run to the FA Cup first round as they prepare to play League Two outfit Wycombe Wanderers on Saturday.

Solihull beat Ossett in a replay during Money's tenure to send the Midlands club through, and the outgoing boss also led them to a 3-1 win over Eastleigh a week ago - one of only three league wins all season.

But Money has decided to call it quits before the club's big day, and resigned following discussions with the board.

"There are so many people at this club who have worked so hard to get it to the level it is playing at right now, and it deserves to stay there," Money said in the club's official statement.

"To do so it needs someone who can fully commit to the club's future, and unfortunately I am unable to do that right now."

In related news, Solihull have signed former Leicester and Preston defender Sean St Ledger, who had been without a club since leaving MLS side Colorado Rapids in December.