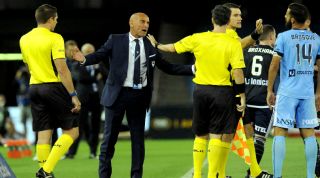 The new scheme will be tested this weekend in the A-League and W-League.

The yellow card offences are ones you'd perhaps expect: they'll be dished out for coaches and staff who persistently leave their technical area, show dissent or sarcastically clap the work of match officials.

Red cards will be handed out if a manager or one of his staff are caught using abusive language, confronting the opposition, spitting, or - perhaps the best one - angrily throwing water bottles.

The trials have been sanctioned by the International Football Association Board (IFAB).

The head of the A-League and W-League, Greg O'Rourke, is hoping respect levels across football pitches nationwide will improve as a result of the new disciplinary proceedings.

"It will help fans and viewers better understand the issues that match officials face on a weekly basis, and help promote respect toward them," O'Rourke said.

"Importantly, it will send a strong message throughout the game at grassroots level that poor behaviour towards match officials and opposition team officials is unacceptable and carries consequences."

Looks like Melbourne Victory's Kevin Muscat is back in those woods again...